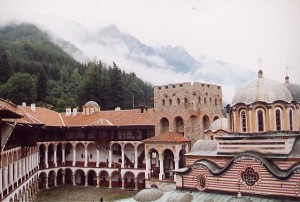 Rila Monastery, two hours’ drive from Sofia, Bulgaria, is the friendliest monastery I have been to since Bhutan (but the comparisons are not fair as Bhutan’s are full of chirpy lively saffron-clad monks, aged eight to over 80, chatting on their mobiles –  and at Rila the only ‘inhabitants’ seemed to be the navy-clad security guards who, with big smiles, louchely indicated that I need to cover my bare shoulders to go inside).

It is over an hour’s detour, there and back, from the main Sofia-Bansko road, and then you need the time for monastery-viewing, but it is well worth it.

What you see today, built by a feudal lord in the 14th century, is a four-floor terraced wood accommodation block that completely surrounds an open cobbled courtyard. In the centre of all this is the typically Orthodox church, with four identical short arms.  The lower outside wall, as well as the inside of its cloister-terrace, is completely frescoed with figures and lots of gold.  Inside, the entire walls and inner dome are painted and gilded.  It is not surprising that in 1983 UNESCO made this a World Heritage Site. 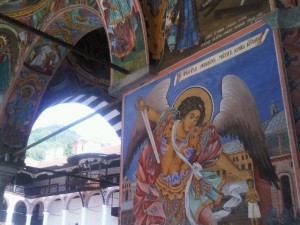 The frescoes on Rila's walls and ceilings are breathtaking 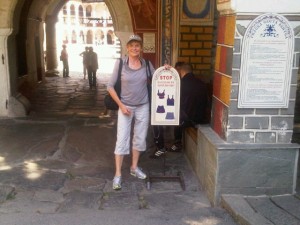 At the entrance, wearing cover-up (I am by the board that says NO bare shoulders)

Groups of culture seekers from Paris had descended from their coaches, guidebooks in hand. Bulgarian families clambered out of Volkswagen Golfs and one Trabi, to look around themselves.  No-one took any notice of a girl alone, and when I needed someone to take a photo of me with the entrance board saying NO (bare shoulders), one of the lovely security guys smiled even wider. 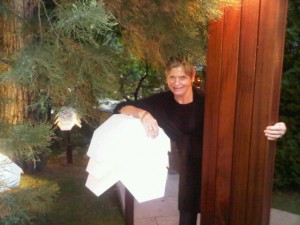 Wrapped around a lantern in a Japanese garden in Sofia, Bulgaria

Luxury experiences in Bulgaria continued.  Imagine dining outside in what must be the largest Japanese garden outside Japan itself. The acres of meticulous gardens at Kempinski Hotel Zografski were, like the 442-room luxury hotel, built by the Japanese, namely the New Otani folks, who first opened it as one of their hotels.

We sat outside, in Captain Cook’s Fish Restaurant, eating superb local tomatoes with crispy Greek calamari and drinking a most satisfactory Bulgarian wine, Via Diagonalis from Castra Rubra, made by the top French ‘flying winemaker’, Michel Rolland.  Oh yes, and the plates were RAK, from the UAE Emirate of Ras Al Khaimah under the direction of a Luxemburger.  How international can a girl’s luxury lifestyle be?