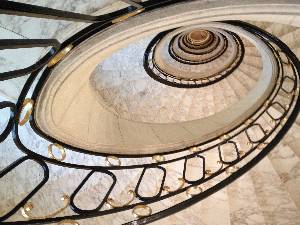 Looking down part of the Alvear Palace staircase

Now it was time to head to another of Jean Paul Bondoux’s restaurants.  Yesterday it was W Santiago Hotel.  The gal left Chile, unfortunately choosing to fly Aerolineas Argentinas, which meant such a late arrival at Buenos Aires’ oldest luxury hotel, Alvear Palace, that the Bondoux restaurant there had closed for the night.

But there is so much else to appreciate in this stunning Leading hotel, which opened in 1932 and is loved and treasured by its owners, the Sutton family.  Look at this sensational oval staircase, going from base to rooftop, a total of 15 floors in all. 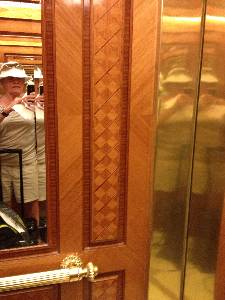 Elevator walls are smooth as silk

Look at the interiors of the elevators, the wood veneer patterned and smooth-as-silk so that each wall is a work of art in its own right.  It is the same throughout the 191-room hotel – which, interestingly, has a total work force of 540.  Everyone looks as if they are just off the Paris catwalk except that here, in Buenos Aires, they look superbly fit rather than reeking of the anorexia that is supposedly haute couture.

When they arrive at work before shift starts, today’s uniform is laid out, with all components ready.

Three times a year there are professional make-up classes and, for every major ‘event’ a make-up artist comes in to do it for them. 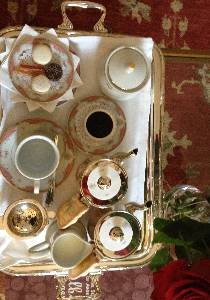 Let me illustrate how a good hotel should run.  Want a wake-up cup of tea?  More and more you can make it yourself, from room supplies.  If not, call room service.

You want an immediate response and to know how long it will be before the order arrives.

And when it comes, superlative is as superlative does, namely a gleaming old-fashioned silver tray holding lots of hotel-logo pink and white porcelain, and tea leaves with silver strainer, and two pots of boiling water (these have little handle cosies so you do not burn your hands when making the brew).  The finishing touch is a small dish of home-made bonbons. 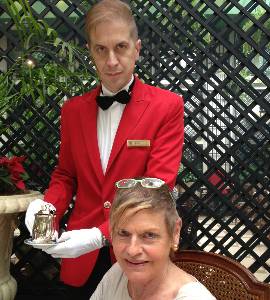 A waiter in the Winter Garden conservatory (note the white gloves)

The waiters here wear bright scarlet jackets, looking almost as if they have come straight from an English hunt – though here they wear trousers rather than jodphurs.  Pablo is one of the breakfast waiters.

He has eyes in the back of his head, constantly scanning the room so that just before you need it your coffee is replenished, or a dish removed. All the waiters work in harmony, it seems, gliding around to soft classical music.

You can sit in the airy glass conservatory, or choose the inner room, closer to the buffet. At the buffets on board Silver Cloud there were always some who seemed to get to the buffet first, as if scared there would be a run-out of food (there never was, but the onboard priest was among the most prompt, perhaps fearing he might be called away). 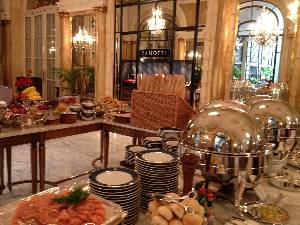 Section of the breakfast buffet ….

Here, at Alvear Palace, young ladies are on hand to explain items on the buffet.

You might want to try, say, a local cheese with green peppercorns in it, or a thick chocolate cake that apparently is dry you have to smother it with dulce de leche sauce. Of course as you might expect at a hotel of this superior quality,  here the buffet has small jars of dulce de leche as well as a big serving jug of the stuff. 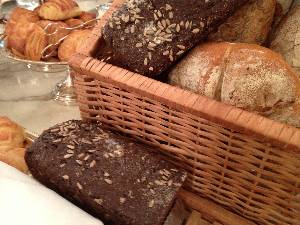 .. and some of the breads

One of the young ladies was also there slicing the bread, to the thickness that you, and not some official, want.  Here is a tip for staying at the luxury hotel that is Alvear Palace. First time, you will exclaim ‘I did not know there was anything like this in the whole of South America..’.

Bring your best clothes, and revel in joining polo stars and other locals in the gleaming lobby bar.  Work out in the stylish gym, or run in the nearby park. Bring your credit cards because, oh boy, you are only two blocks from Patio Bullrich…