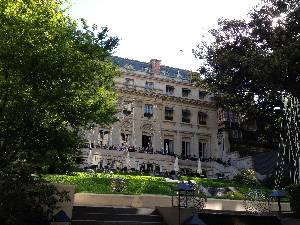 Palacio Duhau, looking up from the luxury hotel's new block

When palaces or monasteries are turned into luxury hotels, those hotels come with instant heritage. In Italy, think Bulgari Hotel Milano, and Four Seasons Hotel Florence. By contrast, in Antalya, the Mardan Palace had to compensate for no heritage whatsoever by going for Las Vegas-style unique selling points, including monkeys in the night club and an enormous aquarium.

By yet more contrast, Emirates Palace in Abu Dhabi has overcome a lack of past by going for outrageous size, and amount of gold leaf used, but all with considerable style (probably only Hotel Café Royal, London, which opened this month, has used as much gold leaf).  The luxury hotel Palacio Duhau – Park Hyatt Buenos Aires, is a genuine palace, as the gal found out. 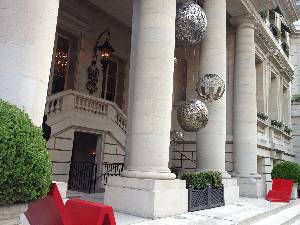 The exterior, with Christmas decorations, on Avenida Alvear

On Avenida Alvear, Buenos Aires, the palace was built in 1934 for the Duhau family – the architect was Léon Dourge.  In 1999 the Duhau descendants sold to local entrepreneur Juan Scalesiani, who fortunately had a fine collection of art already handy.

More bedrooms were need, so, 300 feet away, and fronting the next street down, Posadas, he built a new 17-floor block with 142 extra bedrooms.  The two buildings are connected by an underground art gallery. 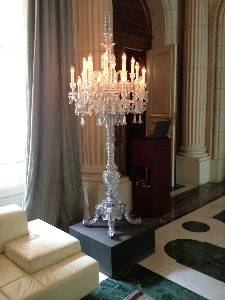 Stunning candelabra in the original Palacio

Juan Scalesiani filled the Palacio with the most amazing art and antiques, of which more later.  A pair of crystal candelbra stand in one of the many parquet-floor reception rooms, and sparkling chandeliers hang from tall-tall ceilings.

Windows in the Palacio seem to be anything up to 12 feet high. In the library, looking out over Avenida Alvear, one wall has an impressive collection of heavy art books, and a display of model ships that surely never could have taken to water (no worry, this is ‘art’). The walls and ceiling of the Avenida Alvear-entrance reception desks are deep burgundy leather. 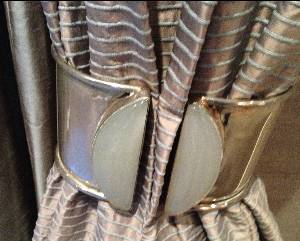 Upper corridors in the Palacio are palest sage, or green-tinged steel colours, with white woodwork. The curtains match. Some are plain, some have gold stripes in them.

In front of the hotel (Avenida Alvear entrance) he has hung open-fretwork steel balls, and put more of them in the garden between the hotel’s two blocks. It is all so titillating you want to tango with happiness – and free tango lessons are offered, Fridays and Saturdays, 2000 to 2130. 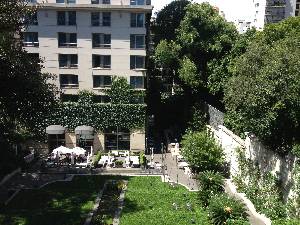 I can see this gorgeous garden from room 203, in the Palacio. I look out of one of the room’s three French windows, with the narrowest of balustrades, down to the new block.

A tinkling river goes down over various falls from the upper level to the lowest, with 51 stone steps down either side.  At all times of day, dozens of pale grey doves, who live in the trees either side – a private residence to the left, the Vatican embassy to the right – these birds jostle down to paddle in the water. At all times, too, locals, and many business people, gather to network in typical Argentinian style. 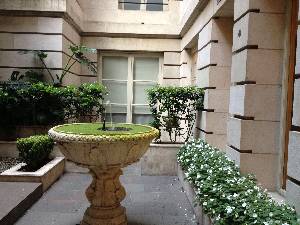 .. view from the gym

The conversion of this palace has been done so skilfully. The lowest level of the Palacio block, two floors below the lobby, houses the spa, with a 75-foot indoor pool and a gym with good Technogym equipment.

Look out from here to a small courtyard with a tiny water jet erupting from a standing ‘baptismal font’, its surface nearly covered in green leaves that oh so complement the bushes around. This luxury hotel is the epitome of style.