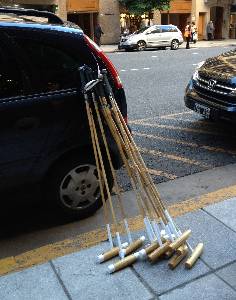 Polo, says the gal, surprisingly used to be an Olympic sport – but is no more (sensibly perhaps, the Federation of International Polo asked for it to be taken out because, along with football, shooting and tennis, what does polo have in common with the original Ancient Greek idea of who can run fastest?).

Today polo, as popularised by such luxury hotels as St Regis, is a spectator sport for travelling enthusiasts, who follow their heroes from Argentina to Wellington FL and to England, and to the other 13 countries where it is played professionally.

You know you are in the Argentinian capital, Buenos Aires, when you see a dapper guy get out of a smart SUV to deliver a set of new polo sticks (Americans use the word ‘mallets’).  These are 50-53 inches long, usually with a manau-cane or composite shaft, and a hardwood, cigar-shaped head (‘tipa’). 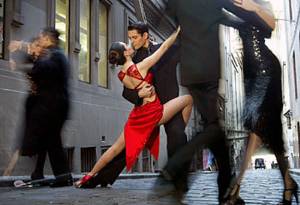 Tango, on any avenida in Buenos Aires

You also know you are in Buenos Aires when you see people just, well, starting to tango – the authentic original style, found only in Argentina and Uruguay.  Tango has been UNESCO-approved since 2009.

It evolved in working-class districts of both Buenos Aires and the Uruguayan capital, Montevideo, and its popularity had its ups and downs (during the 1950s, it was often male-only and, as such, was banned by Peron as a form of public gathering).

Today all the best hotels in Buenos Aires can direct you to tango classes: at Palacio Duhau Park Hyatt Buenos Aires there are free classes, in the hotel, every Friday and Saturday evening. 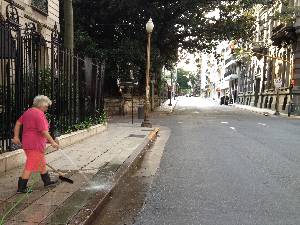 When in Rome do as the Romans do, which means when in Buenos Aires you must network, talk to your friends and neighbours over coffee, perhaps in one of the dozens of cafés in the giant Patio Bullrich shopping mall.

Or simply talk to people in the street. Every minor thoroughfare becomes a communication channel, day long and far into the night. It is not unusual to see parents with toddlers out at 2200 or even later… but in the morning, say around 0600, the streets are empty except for buildings’ janitors.

These are invariably men, who diligently hose the pavements, and bring out polishing machines.  As I ran around chic Recoleta, the area that houses Alvear Palace, Four Seasons Hotel Buenos Aires and Palacio Duhau Park Hyatt Buenos Aires, I only saw one female janitor, who injected a bit of colour at that hour. 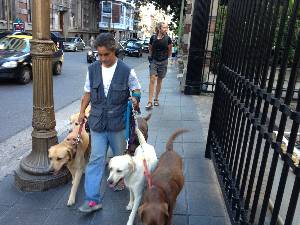 Dog-walking, later in the day

Buenos Aires is one of the world’s ten best outdoor cities. Walking its central streets  is a delight as, thanks to those janitors and the ways of the people (who do not seem to drop litter as some Brits do, ruining their own beautiful cities and countryside).

Head down from Four Seasons two blocks towards Libertador and the immaculately mown grass bank by the gas station holds several striking sculptures. Head anywhere in the Recoleta area and you are likely to pass dog-walkers, sometimes with as many as nine canines being taken out en masse. 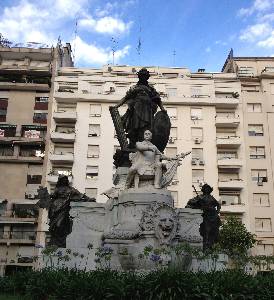 Head to the square just behind Four Seasons and you are surrounded by magnificent early 20th century mansions, in 18th century style, and apartment blocks that soar up to 15 floors.  In the centre of all this is a stone statue of politician Cesar Pellegrini 1846-1906, protected, as it were, by a giant bronze montage of goddesses.

Pellegrini, who at one point was Vice President of Argentina, has a street named after him, and a hotel here, a hotel there. Buenos Aires likes dedicating public places to people – run along Avenida 9 de Julio to the obelisk at Corrientes and ground-set plaques honour a different dedicatee every few yards. 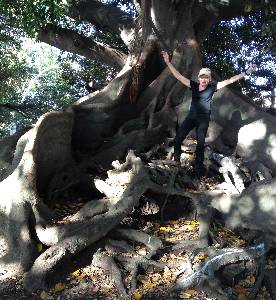 And someone tries to hide in a tree

Cesar Pellegrini protects the west end of Avenida Alvear. Process along this for six blocks and you pass, all on your right and in order, the magnificent Vatican Embassy, the luxury hotel that is Palacio Duhau Park Hyatt Buenos Aires (with a big Ermenegildo Zegna right opposite) and, two blocks further, the Alvear Palace, which is a Leading hotel.

At the far end of Avenida Alvear you come to a small hilly grass area dedicated to St Martin de Tours, dominated by one of the biggest trees the gal has ever seen.  It is a Gomero, ficus macrophylla, and its incredible branch reach must have a 60-ft radius.