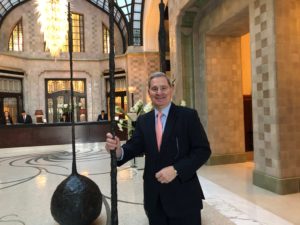 GM Yves Giacometti in the lobby

Budapest Four Seasons Gresham Palace is, as its name implies, a palace, designed in 1906, by local architect Zsigmond Quittner, to be headquarters of the Gresham Life Assurance Company. Then, the gal learned, it went through two World Wars, and Hungary’s 1956 uprising and at one time it was briefly headquarters of the Red Army. Jump forward to the beginning of the present century and it was top lawyer Béla W Fejér, a friend of Isadore Sharp, who led the initiative to turn the six-floor palace, or what remained of it, into one of the most beautiful of luxury hotels. Opened in 2004 with 179 rooms and suites, and a rooftop gym and indoor pool, it was bought in 2011 by its present owners, Oman’s State General Reserve Fund. 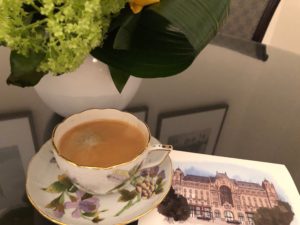 Sometimes, but not often, bedroom designs last more than a few years. Richmond International’s concept for the rooms here evoke European style, understated rather than in-your-face – see a video of one of two Chain Bridge suites, room 103.  I loved the hand-painted Herend Hungary floral china that went with the Nespresso machine, an illustration of art meets function. Richmond International, under its ultra-creative leader Fiona Thompson, is currently ‘tweaking’ public spaces, whatever that will mean.  The hotel had, actually seemed perfect when it opened but it is even closer to perfection now.  Originally it had restaurants flanking its main entrance, looking across Szecheny garden to the Chain Bridge. In 2008. the ‘crisis’, which saw the collapse of the national airline, Malev, meant the closing of the haute cuisine Pavas restaurant. 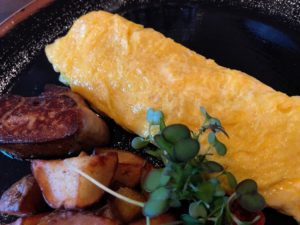 GM Yves Giacometti and the owners, therefore took a bold step. A side-street facing meeting room was combined with Pavas to produce Kollázs a massive L-shaped space, with a prominent outside entrance on Zrínyis: come in and face Josper and other grills, walk left, or right, through a succession of wood-lined rooms, with a circular bar at the heel of the L (designer is EDG). Local politicians and other A-Listers come in through the side door, while hotel guests come in direct from the lobby.  And who are those guests? Well, like most top hotels in this immediate area, about 50% are North American, but here the whole complement of guests also includes about 9% from the movie world. 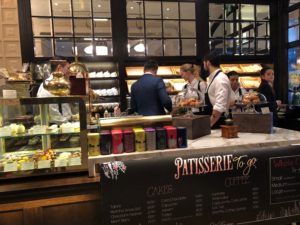 There are several studios nearby, of which the largest, Origo Film Group, has 9 complete soundstages. The Government gives all the support the studios need for such movies as Atomic Blonde, Blade Runner 2049 (in which director Denis Villeneuve used Budapest’s former Stock Exchange as a Los Angeles casino) and Evita.  Yves Giacometti never names names but it is known that Harrison Ford, Tom Hanks, Rosamund Pike and Charlize Theron have been working in Budapest in the last few years. It is also common knowledge that some scenes of the 2015 movie Spy, with Jude Law, were actually shot in the hotel’s gorgeous lobby… so, come to this luxury hotel, and you never know whom you might meet picking up a coffee-to-go from the kiosk at the lobby-set entrance to Kollázs. WANT TO SEE CHAIN BRIDGE SUITE #103?