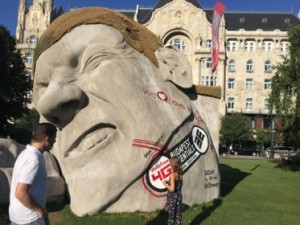 A sculpture, one hopes temporary, in front of Four Seasons

You never know what you are going to find in beautiful Budapest. Come out of its top-rank luxury hotel, Four Seasons Gresham Palace, and there is a 12-foot blob, sorry, sculpture, in the middle of Széchenyi Park, between the hotel and the Chain Bridge, across the Danube to Buda. No-one seemed to be able to tell the gal if this sculpture is a foretaste of the annual Sziget Festival, on Sziget Island (this year’s musical line up, August 10-17, 2015, includes Robbie Williams, plus Paloma Faith, the Always Drinking Dancing Band and at least 80 other acts, all put together by Károly Gerendai, who is also the brains behind the city’s year-round Ferris wheel). 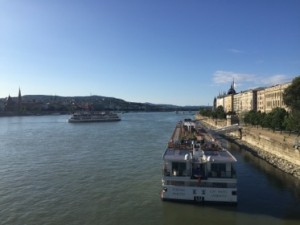 River cruisers at work (or is it play?)

The Danube not only separates Buda and Pest but it is the lifeline, so to speak, of Budapest. This year the river cruise season, which runs April through to October, is busier than ever. Budapest welcomes about 45 boats a day (sic), and the ones I saw, and counted, had 72 cabins. Right, assume 70 of those are doubles, that makes 142 passengers per boat. Multiply that by 45 and think of the influx of tourists, most of whom are Americans who seem to have taken to river cruising, especially on the Danube, like ducks to water. Viking works with Hilton Budapest, so many cruisers also have two nights staying at the top of Buda, with marvellous views down, and across the river to Pest. 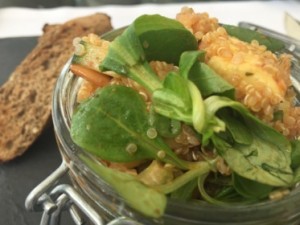 Quinoa and avocado salad in a kilner jar, on Korso terrace at the InterCon

Or sit riverside on the Pest bank and watch the activity from there. I lunched at InterContinental Budapest, which I have known since it was opened, as Forum, by Akos Niklai (now President of the Hungarian Hotels Association). He was determined to make the Forum the best hotel in Europe, which it became. It also evolved to become InterCon, while the old InterCon, and I use the adjective intentionally, became Marriott. Immediately next to the now-InterCon, on the inland side, the Hyatt used to have a full-sized plane hanging in its open atrium. Now that hotel is Sofitel. Meanwhile, back at the now-InterCon, what was a river-facing gym is now a stunning InterContinental Club lounge, with four hours’ cocktails every night as you watch the river view. Down at ground level, Korso’s outside terrace stretches the whole length of the building and apparently is a great venue for fashion shows. 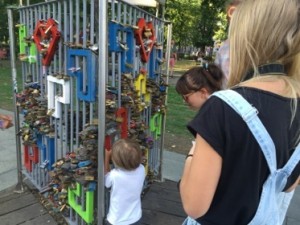 Ah fashion. More super-luxury malls and boutiques are needed to attract foreign shoppers, they say (and visa relaxation would help attract more Chinese, although Hungary being part of Schengen helps). Chinese incoming tourism upped 19.8% in 2014 over 2013, and this year should be even higher, thanks to new direct Beijing-Budapest flights.   As I walk through old Pest, I wonder what Chinese make of that statue outside the city’s top luxury hotel, and what they make of this instant-sculpture, in Elizabeth Park in front of the lovely Kempinski…