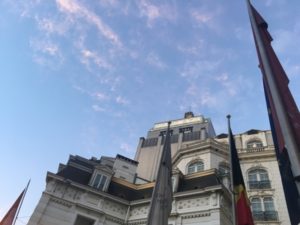 Looking up at Wiltcher’s Steigenberger

And so to Brussels, to yet another significant luxury hotel. The gal first knew what is now Wiltcher’s Steigenberger when it was Conrad, and then in 2013 it switched to Steigenberger. Apparently when it opened, first in 1911 and then again in 1993, it was called Wiltcher’s, and now the name has been revived, to show both its origins and the current management company. This is a truly classic hotel, a ‘rock of ages’ rather than a disruptor – it is the kind of hotel loved by delegates, and their enormous entourages, which of course include masses of security, which benefits everyone. Stay here, and you are comfortable, and well looked after, says the gal. 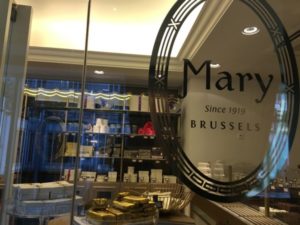 Looking at its Mary chocolatier

Well, there is even an in-hotel chocolate shop called Mary (this replaces an art kiosk that, when I was here before, displayed a single book, Annie Leibowitz’s €2,000 Annie’s Big Book, on a Marc Newsom stand). Mary, the chocolatier, was founded in 1919 and it has held the Royal Warrant since 1942 – I am afraid I could not remember who the current ruler is, either, but it is King Philippe, and presumably he has been eating Mary’s chocolates since he was born 56 years ago, and now his Queen, Mathilde, and their children, the heir, Princess Elisabeth, who is nearly 15, and her siblings Gabriel, Emmanuel and Eléonore, must enjoy them too. Belgians do seem to be addicted to chocolate. Head out of the hotel on to Avenue Louise, turn left, walk 20 yards and you will have passed several other maisons de chocolat. 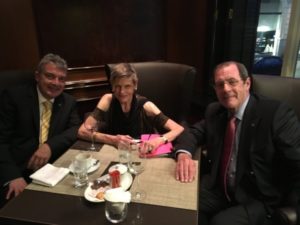 Back in the hotel’s complex there is also a Pierre Marcolini boutique (this is one of the Sybaritic Single’s favourite chocolate brands). I am amazed I did not have chocolate shampoo, conditioner and shower gel in suite 239, a spacious and comfortable room looking out on a rear courtyard – in fact it was Aigner, Black and White). During the summer, it is really enjoyable dining outside, under trees on the Café’s terrace, but tonight it was so windy we moved inside, to Loui bar. This has a really clubby feel, with lots of leather, and a menu that mostly come with frites – as ubiquitous here as in neighbouring Netherlands. My friends Han Oldenburger, who is Dutch, and Jürgen von Massow, a Bavarian-Hanseatic German, both had steak and fries, but I went for cod. 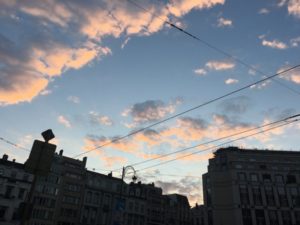 Looking up at the morning sky

In the morning there was a slot for sightseeing, or at least to pass some of those other chocolate shops. Once again I admire the Belgian talent for sectioning roads: what had been the very-wide Avenue Louise still has a grassy central area for tramlines but road traffic is now confined to one lane, either side, with the rest of that space divided off into carparking or for U-turns and the like. I looked up at the morning sky and hoped that my forthcoming trip back to the airport would be quick – it was, we missed the rush-hour but, a warning, security is so tight that you now go through a holding tent, where you might be diverted for hand-searching, even before you reach the terminal. Leave the comfort of the luxury Wiltcher’s Steigenberger hotel in plenty of time (if you had no time for city sight-seeing, watch the video below)