British Airways’ popup ‘flight’ BA2012 is the latest – and ultimate – of the short-term, momentary (and momentous) ‘pop-ups’ that the gal is experiencing in this exciting global life of travel with a twist.

It is all thanks to Frank van der Post, long time hotelier and man of style, that BA2012 appears here.  Frank was with InterContinental hotels for many years, then he moved on to Jumeirah and became COO of that luxury hotel company.

In early 2011 he joined British Airways as Managing Director Brands & Customer Experience. Mary, he said in his charming Dutch way, you have got to experience BA2012 – it is redefining the British Airways brand, showing it is contemporary yet elegant and stylish.

He put me in the capable hands of Lu(isa) Fernandez, an amazingly creative Spanish-Brit who studied international marketing at Bournemouth University, near England’s Jurassic Coast, because it was what she always wanted to do.

She heads the airline’s joint ventures with, for instance, Adidas, BMW, BP, BT and many more global giants.  She is also in charge of maximising British Airways’ sponsorship of the 2012 Olympics and Paralympics.

Somehow her team found an empty factory at 10 Shoreditch High Street, which is conveniently only five minutes’ walk both from London’s Liverpool Street underground (tube, subway) station and the exciting Andaz Liverpool Street, one of the best hotels when it comes to pop-ups and temporary exhibitions.

In fact at the appointed hour I walked right past it, and went into a Pakistani-run tobacconists’ to ask the way.  Back down there, he said with a smile. I retraced my steps, and went through glass doors in a blank brick wall.

Inside was a tennis-court sized haven of music – two DJs, named on a blackboard, play each evening.  At the far end the bar sold Taittinger, a range of wines and cocktails and really whatever you want.  Interested participants, off the street so to speak, were definitely the chattering educated class.

I spoke to a doctor, male, and an artist, female.  Every night through April 18th, 2011, it will be packed like this – rush there quick, to see trend-setting ideas from what many still call ‘the world’s favourite airline’.

British Airways has chosen three cultural Names to mentor three Aspirants.  Tracey Emin is the artist – I love her pink neon illumination, ‘I Loved You More Than I Can Love’, on a wall in Hix at The Albemarle in one of London Mayfair-area’s most cultural luxury hotels, Brown’s; her next exhibition, in her hometown Margate, is She Lay down Deep Beneath the Sea, Turner Contemporary, May 26 to September 23, 2012).

For British Airways, she has mentored artist Pascal Anson, a senior lecturer at Kingston University who has worked quite a lot with the British Council.  For British Airways, his bird design entry has already resulted in the airline’s nine A320s being transformed, by Heathrow technicians, into giant gold and white birds (the livery will stay for about five years). 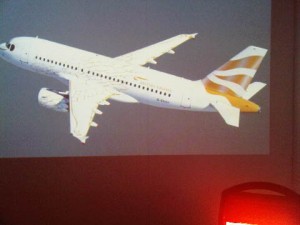 .. and a video of one of the first of the nine A-320s that are being redecorated

Pascal is a good friend of Philippe Roux-Dessarps, GM of the Lost In Translation hotel, Park Hyatt Tokyo.  The walls of this great room show his original sketches, and photos of birds, and a collage of real feathers, and videos of the painting and the finished plane.

In the adjacent cinema we watched a ten-minute movie written by another of the Aspirants, entrepreneur Prasanna Puwanarajah, mentored by film-maker and actor Richard E Grant.  Prasanna is one-helluva do-not-waste-a-second guy.

Born in England to Sri Lankan parents, he studied medicine and in fact worked as a doctor in the NHS (National Health Service) for two years before deciding hang it all, what he really wanted to do was entertainment.  He acts, he directs, he produces, and as in this instance he writes.

His movie is silent, just like The Artist – a pure coincidence, he says in magnificently audible English in the kind of tone that could flow from Sir Patrick Stewart’s lips.  He wanted to show how perfectly ordinary locals are involved in the Olympics, and he built his theme around cycling, a solitary sport that relies largely on the individual rather than team-mates, as in football or synchronised swimming.

The Olympic velodrome will also remain as-is, after the Olympics, rather than being converted or transformed. His imagined character, brilliantly played in the movie by Timothy Spall, is about 50, overweight and unattractive, with a pink fluffy dressing gown of a make-up free wife in a characterless Essex house, smoothes down the velodrome floor, inserting one panel, upside down, on which he carved Ride On. (Timothy Spall, by the way is just about to star with Jennifer Saunders in the BBC series Blandings, based on PG Wodhouse – Spall plays the amiable Lord Emsworth, who only wants to be left in peace with his beloved pig, the Empress of Blandings: the series will be shot at Crom Castle in Northern Ireland.)  Emotional impact 10/10 – wait for it to come up here, on girlahead home page.  It was downloaded 150,000 times within three days of being posted on YouTube.

Whew, after that, emotion drained and stomach empty, it was time to take our table in the ‘restaurant’, decorated as an A380-wide plane section, white walls, plane-shaped windows with real clouds moving behind.

Catering was by Do&Co, the Vienna-based entertainment food company headed by the brilliant Attila Dogudan, whose company does all Paddock Club caterings at every Formula One bar one.  Here the restaurant has 90 seats, does two sittings a night @ £40 excluding drinks and the entire run sold out 3.5 hours after details were posted on Facebook.

We were dining off food prepared by the culinary Aspirant, mentored by Heston Blumenthal – the guy who has thankfully moved on from molecular to the real food that he serves at Dinner by Heston at that uber-luxury hotel Mandarin Oriental London. 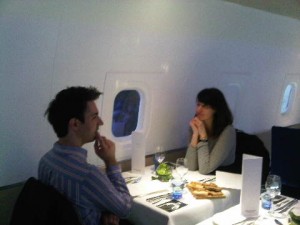 Heston and British Airways chose as the winner of the Great Britons menu Simon Hulstone, chef of the Elephant in Torquay.  As his mentor says, ‘Simon has created an exciting, delicious and well-balanced menu that pays homage to the Games in a clever and subtle way.  The dishes celebrate our rich history and British talent at its best.’

Hulstone used ingredients that were popularly used in 1948, at the time of the last London Olympics, when rationing was still in force (and Olympic ‘probables’, though not ‘possibles’, got double the weekly steak ration, namely two bites rather than one).

So, dine British Airways by Hulstone and you can start with Rillette of Brixham mackerel or Salad of golden beetroot with peppered goats curd, micro watercress and elderflower dressing. Go on to your main course, which in my case was Sustainably-sourced fish pie with warm tartare sauce, and my companions oohed with pleasure at their desserts, Grilled chocolate fondant and Lemon curd cheesecake.

Our table, the first class section of the ‘plane’, behind a curtain, was a verbal riot of ideas, coming from Lu Fernandez, her colleague Stuart Mayo, head of Brand Communications; Mayor of London Boris Johnson’s head of Marketing Daniel Ritterband (interestingly, his grandparents came from Baku); head of Communications for the Paralympics Jane Jones and rugby legend Sir Clive Woodward, who let slip that for keeping fit today he sticks to squash.

Honestly, if this is the future of flying I am all for it… No Lost In Translation here, it was Learn Every Minute. The only thing that was missing, honestly, was duty-free, no inflight sales on this ‘flight’.

But the girl did not mind. Back at Andaz, she knew that were she staying put she could pop-out, tomorrow, to the great shopping nearby, but, just like any ‘pop-up’, her end here is in sight and tomorrow it is a dawn start for Bonn…