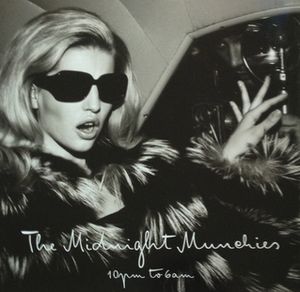 What is the gal up to?  Is she sleuthing it in disguise yet again?  No, dear reader, this is a page from the room service menu – title, That Sounds Yummy – in bedrooms at the luxury Four Seasons Las Vegas hotel. Seeing this elegant woman in disguise set off a train of thoughts about how a hotel that opened in the last century, well, 1999 to be exact, can keep itself not only up to the minute but ready for tomorrow.  The hotel is interestingly sandwiched, on the 35-39th floors, of the mammoth golden-glass Mandalay Bay casino-hotel, but you can stay here, at Four Seasons, and not know that a world of slot machines and inappropriate clothing exists. 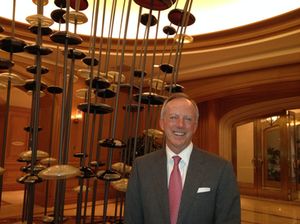 .. at the hotel run by Mark Hellrung

The Four Seasons Audi – which has WiFi enabled – swings into a dedicated turning area and inside the front door I am now greeted by this sculpture, which is shown off (I refuse to use the oh-so- dated word ‘curated’) by the hotel’s highly creative boss, Mark Hellrung.  The sculpture is indescribable but it works.  There are other Asian-inclined sculptures set in some public areas but they are more reminders of the olden days.  The lobby is today, and tomorrow.  Instead of facing a rather boring residential type area, as before, the people working behind front desk now look across at a 24/7 buzz.  One sitting area has four high-backed chairs that look like white-outline bird cages. 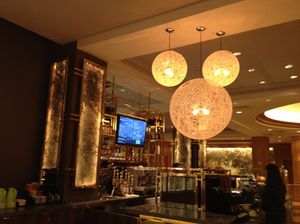 The new-look lobby is meeting place for beautiful people

Elsewhere here are communal tables with lots of sockets and direct-charge units for mobiles (they have similar facilities in the gym – where each piece of equipment has a clear list of television channels, in big letters, and where, sensibly, there are wall-fixed hand sanitisers).  New, too, is a proper bar counter.  All day and evening it serves cocktails and wine and draft beer, to hotel guests and to locals, who appreciate coming here to escape gaming and mass tourism.  This is also the place to meet, the equivalent of Meeting Point signs at airports.  Early and later in the morning, this new bar also serves breakfast, and jolly good it looks too. This is grab-and-go, or grab-and-sit. 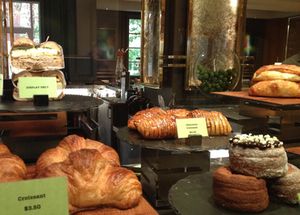 Choose your pump-yourself coffee. They know their LavAzza here.  Order à la carte and you have a choice of espresso con panna, with cream; marocchino, with hazelnut, cocoa and foamed milk; bicerin, with hot chocolate and whipped cream.  Go simple, with toast, and it is some of the best multi-grain you have ever come across, from Bon Bread Baking Co. There are enormous croissants, New York donuts and muffins, priced $3.50 to $4.50 you can also opt for a wholewheat bagel filled with egg white omelette and Cheddar, for $7 – or go wild, with pastry chef Jean-Luc Daul’s signature giant pecan-maple sticky bun, $8 a piece. Some merely want granola and fruit pots, and whole bananas. 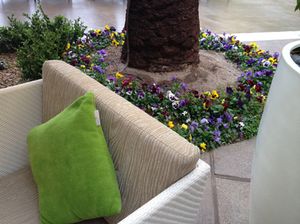 Or sit in the garden…

There are so many alternatives for breakfast here. Sit outside (where else can you find an outdoor restaurant in Las Vegas?) and order from the adjacent Verandah.  Whereas last night I had chef Alessandro Minichiello’s marvellous burrata confection, and grilled tuna, now I debate which of his breakfast sets to try. There is basic continental, which comes with a choice of fruit, and granola or yoghurt. Add eggs, for American. Go Jumpstart, with cholesterol-free omelette with mushroom, basic, tomato compote and berries, toast – or why not Antioxidant, with oatmeal, dried currants, blueberry non-fat yogurt with granola, blueberry-carrot-zucchini muffin, and fruit?  There is also gluten-free, with a carrot juice shooter. 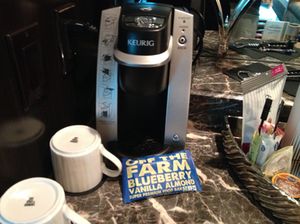 Or snack in your room

I was raised to breakfast like a king, lunch like a lord and dine like a pauper.  OK, I follow the first two.  But for those who stupidly decry any proper breakfast, there are food bars in the minibar, to go with the make-your-own Keurig, in which Coca-Cola has just invested. This is such a thoughtful hotel (it even has a proper desk chair that is high enough to work at your laptop, which I only find in about one hotel in 20).  I see the minibar also has eye-catching tins that are labeled ‘do you have an aching body?’ – they hold pain relievers – or ‘do you have a pimple?’ (here are your bandaids)  Of course you might have had to leave this most enjoyable luxury hotel too early for breakfast proper, in which case you can call room service and see if your order is delivered by our lady of the night, also known as the sleuth in disguise.