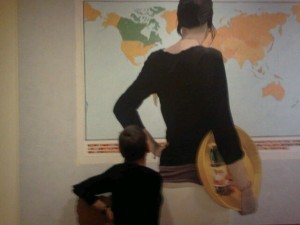 Looking up at a Sönke Poppe

Hamburg is much more sexy than the idea of a ‘city of Airbus and big shipping’ might conjure up. Loved the giant, oversize portraits on the walls of the Fairmont Hotel Vier Jahreszeiten’s Haerlin gourmet restaurant – they are by Sönke Poppe (apparently he specialises in rear views of women).

Another Hamburg feature that will make a luxury-travel gal say wow, in years to come, will be the city’s Elbephilharmonie, a glass fairytale being built to float on top of a 1963 red brick warehouse (designers are the Swiss pair, Herzog & de Meuron, and the current cost has doubled to euro450 million and still counting…). 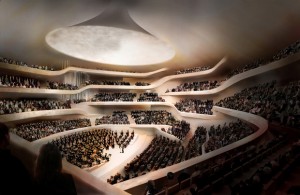 Model of the main 2,500-seat hall at Elbphilharmonie

The acoustics are promised to be the best in the world – concept Yasuhisa Toyota, Nagata Acoustics, did the Suntory hall in Tokyo.

Yes, a reason to come back.  There is already a restaurant ready for Elbphilharmonie, by the way. Carls an der Elbphilharmonie is being managed by the Rahe family, who own the Louis C Jacob hotel, and if they can serve, at Elbphilharmonie, the jellied caprese salad in a martini glass that I had in the hotel’s bar, oh wow. 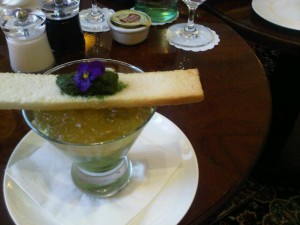 But it was time to leave.  Having breakfasted in Germany (Café Condi at the Fairmont, those amazing pumpernickel breads that make any gal want to eat healthy for the rest of her long life..), having started the day there, a day-long European gastronomic tour was under way.

Lunch was in my London Heathrow home, in British Airways’ Gold club lounge, the bastion of memorable air travel. The salad there was one of the healthiest imaginable, help-yourself to green bits and couscous and pulses and mozzarella and plain olive oil.

Dinner was in France – just. Monte Carlo Beach is technically 300 metres east of Monaco, although as part of Monte-Carlo-based SBM it adheres to Monegasque rules (but, because of its location, it can count in this round-Europe dine-around). 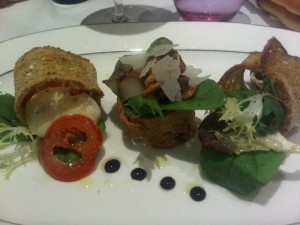 And look at this salad!  An Autumnal salad, Elsa style, consisted of three bread swirls holding a miniature caprese, mushroom, and green salad bites. What would Elsa have said?

This, by the way, is not Elsa the Lion – raised by George and Joy Adamson in Kenya 50 years ago – but Elsa the bon vivant and gossip columnist, Elsa Maxwell, 1883-1963.   Among other things, she introduced Callas to Onassis, edited, wrote and organised parties (one of her many quotes is that existence is a party – you join in after it’s started and you leave before it’s finished).  Love her quotes, must remember them. 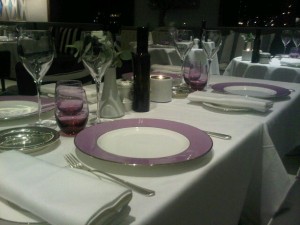 Elsa restaurant, on French land at Monte Carlo Beach Resort, has been designed by Paris-based India Mahdavi (who despite her first name is Iranian).

Elsa would have approved, of the soft lavender table setting, and the bold sunflower and white menu covers. On the reverse is yet another of her quotes, Serve the dinner backward, do anything – but for goodness sake, do something weird.   She hated anything mundane (Bores put you in a mental cemetery while you are still walking….)