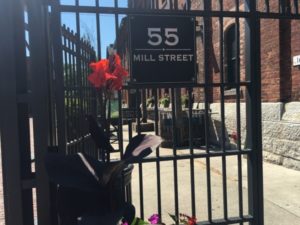 Entrance to the Distillery District

As a break from the luxury hotel world, the gal was whisked away by one of the best Toronto tour guides imaginable, Alix Blum. Despite her immaculate stiletto heels this Toronto lady took me on a fascinating, if breakneck, tour of the cobbled streets that form the Distillery District, one of National Geographic’s top picks for the whole of Canada travel. In 2001 Cityscape Holdings cleverly bought a series of old buildings, anchored by the 1832-vintage Gooderham and Worts Distillery – at one time this was the world’s largest distillery, producing annually over two million gallons, US measure, of whisky. 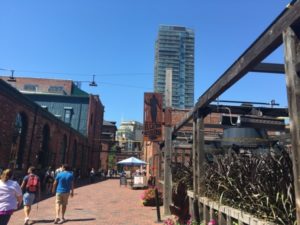 One of the District’s pedestrian walkways

Among the well-chosen tenants in the District today is a microbrewery, Mill Street Brewery. There is also a theatre, and plans for residences and offices, but in the main the draw today are ground-floor stores, and restaurants (it reminded me so much of the Docks renovation in Marseille). We go and admire El Catrin Destileria – see top photo. This Mexican restaurant has been designed by Alessandro Munge of Studio Munge: I especially love its whole wall of graffiti, by Oscar Flores, a street artist flown here specially for this commission. We eat, however, at Cluny, a plausible French bistro with friendly service. 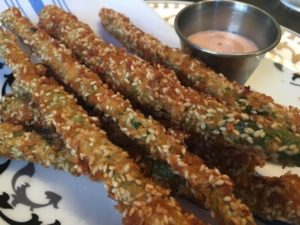 And then we continue on our way. It really is a pity that many business travellers, including myself, do not have more time to explore a destination – what I liked about this particular excursion is that I knew it would take three hours’ total, not enough time but better than nothing. The Wall Street Journal (August 6-7, 2016) had an article by Jennifer Breheny Wallace extolling the concept of Quantified Self vacationing, life-logging while you are on holiday. This is the perfect time, she says, to start assessing your moods, say via Moodscope, which asks daily psychological questions that can then, apparently, be used to score your mood. 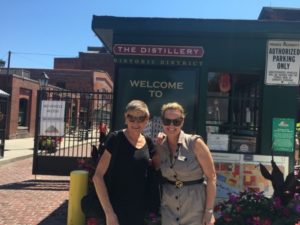 What balderdash. Another stupid idea is RescueTime, which manages your time so that you decide which emails to kill to save time. Surely it is less stressful to do away with all this self-tracking and just get on with life. Frankly, if I had to waste time checking a site to see which luxury hotel to go to next I would never get anything done but, p.s., I am definitely going to slot more time for Distillery District, and tourist trekking with Alix, on my next visit to Terrific Toronto. NOW SEE THE VIDEO OF DISTILLERY DISTRICT, BELOW