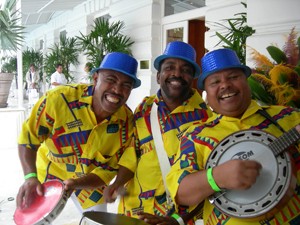 Carnival samba group at the Copa

Rio is so much fun, any time of the year. As well as meeting Carlos Nuzman, President of the Rio216 organizing committee, I had time to catch up with my good friend Carlos Villanova, a career diplomat who was seconded from Washington DC to be President Lula’s Press Attaché for seven years before being passed on, yet again, to be the all-important Director Communications Rio2016.

He told me about social media and the Rio2016 Olympics. On 3 October 2009, the day after Rio de Janeiro was awarded the 2016 Olympics and before he came onboard, rio2016.com had already been taken. Fortunately that forward-thinking person was a Rio-loving American, who was ‘only too happy’ to give Rio’s Olympic Committee the site.

Until London’s Olympics are over, Villanova is playing a passive social media role, but despite ‘doing nothing’ the Rio2016 Facebook is 2.5 times as expected, and a simple Twitter message asking people where they would be on 5 August 2016 elicited 800,000 replies.

This is not surprising. Brazil has a population of 190 million, and according to comScore Media Metrix, 23.36 million, aged 15 or over, are registered Facebook users. In the same survey, Brazil topped twitter.com’s global market reach, with 20.8% of the population using it (Indonesia had 20.5%, the Netherlands 19%). Already, without having to do anything positive, Rio2016 is among the top ten brands in Brazil, immediately below Nike Brazil (the list is invariably led by soccer teams).

Awareness has been boosted by such events as the 31 December 2010 unveiling of Fred Gelli’s fabulously-friendly three-dimensional Games logo, in front of an anticipated two million cheering people – a lucky few inside Copacabana Palace, whose MD Philip Carruthers was instrumental in helping win the bid, with the others watching 154 sq m screens outside on Copacabana Beach.

Carlos Villanova is currently working with a local marketing company, AG2 Publicis Modem, which has 12 people fulltime on his case: not coincidentally, AG2’s other clients include Rio2016 first-tier sponsors Bradesco, the main bank partly held by Portugal’s Grupo Espirito Santo, and Proctor & Gamble. Soon, he says wants to bring at least one of that dozen in to work, inhouse. Already, rio2016.com, in English and Portuguese, leads easily to both Facebook and Twitter, but a new site, launching early September, will be even easier to navigate, and will add Spanish.

An important element being introduced is the total transparency of the Games organisation. It will be possible to find details of every tender, every real of income and every expenditure – perhaps it helps that Villanova’s boss, the President of the Rio2016 Organizing Committee Carlos Nuzman, was a career trial lawyer. Anyone with a proposal to put to the Rio2016 organising committee has to sign an intellectual property waiver to prevent future recriminations. 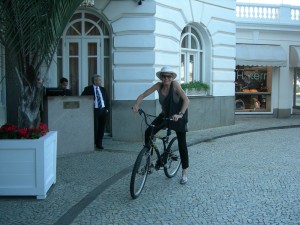 Biking at the Copa 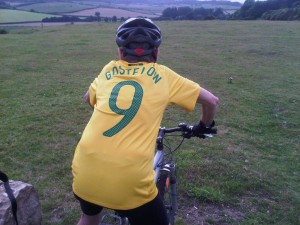 Back home, with my Brazil football shirt

After all my interviews, it was time for some serious cycling back at the Copa (left) and then I flew back to England – and put on my fabulous Gostelow-named Brazil football shirt for a post-flight cycle ride (right). Well, a gal can’t get lazy, right?