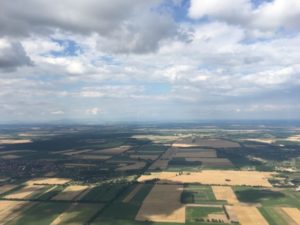 Flying in to Budapest

Flying into Budapest to see its latest luxury hotel, the gal was excited. Hungarians are friendly and warm, the Danube always makes her smile, and the city’s two sides – Buda, up the hill, and Pest, where most of the luxury action is – are both full of historic buildings. One of these, originally built as the headquarters of the Italia Adria Insurance Company exactly one hundred years ago, in 1916, has recently been reflagged as Ritz-Carlton Budapest. Considerably damaged and burned during WWII, it has been extensively rebuilt. Around its exterior are ten lifesize marble statues representing insurance types. 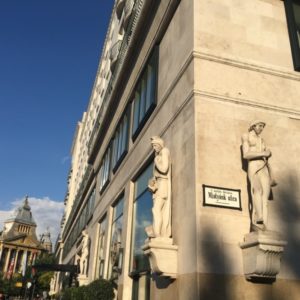 Sculptors Miklós Ligeti and Ede Telcs did the statues. The photo here shows, on the left, Saint Florian, Telcs’ adaptation of fire insurance. On the right is Ligeti’s depiction of Parca, also Partula, the Roman goddess of childbirth, cutting the thread of life, representing life insurance. The 192-room hotel is owned by the Al Habtoor Group, whose CEO, Mohammed Al Habtoor, is a polo enthusiast, and perhaps in years to come he will add more sculptures for sports insurance. Right now he is investing heavily in updating the interiors. The stunning blue carpets have wavy and swirling lines, as if a reminder of the Danube less than ten minutes’ walk away. I was in end suite 817, at one far end of the open-sided corridor looking down into the nine-floor open atrium (the gym, spa and club lounge are also on the eighth floor but all are currently works-in-progress). 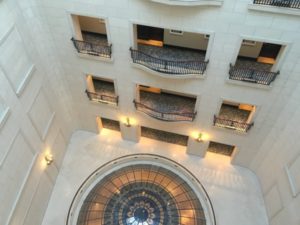 Looking down into the hotel’s atrium

What was one enormous all-lobby restaurant has already been divided. The front is the cupola lobby lounge, where breakfast and afternoon tea are served (near here is a vitrine displaying memorabilia of famous Hungarians, including Biró of ballpoint fame, and Rubik of cube fame, and Liszt for music and Zsa Zsa Gabor for, well, tenacity. The rear of the lobby is now a stunning casual-good lunch and dinner restaurant, ‘Deák St Kitchen Wine & Grill (est 2016)’, named for the rear street, Budapest’s main shopping thoroughfare. It was conceptualised by local restaurateur, Peter Baldaszti, and designed by Mark Bithrey and B3 Designers – am I alone in longing for designers to go back to a name, like Rochon or Yabu Pushelberg? 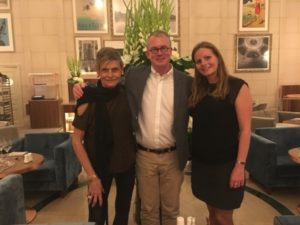 We sat outside on Deák Street’s terrace, looking out over the street and its busy life. The wine list and menus are wrapped in lovely-aroma real leather, the sommelier goes into depth on local wines – we drink Aldás St Andrea Bikavér 2012 and Takler Kékfrankos Szekszárd 2014. Of course I had to try the signature mangalica pork, from a woolly-coat beast (see the photo top of the story), bred in the 1830s for their lard. Mangalica are now seriously coveted – see Boook Publishing’s The Mangalitsa Pig: Royalty is Coming to America. The pork is so juicy and soft, loved it. And then I went up to bed, opened my windows, always a big plus in any hotel, especially in summer, and in the morning I was able to salute the sun on my metre-wide balcony, another plus, at any time. In the morning, too, I trotted round Elizabeth Park, immediately in front of the hotel, and along Déak Street, now deserted as the permanent and pop-up restaurants and shops along here were not yet open. This Thursday, July 14th, 2016, the hotel is holding a Hungarian dinner in the street, with entertainment that includes national singer Hangácsi Márton. Today, I did think about having an avocado smoothie and a ‘Hungarian breakfast’ with, among other things, an omelette with paprika, potatoes and foie gras, but decided to take a raincheck. I say goodbye to new friends Alistair Scott, who has flown in from London, and Carmen Schuler, returning shortly to her base at Ritz-Cartlon Abama, Tenerife, and head on my way. I cannot wait to come back and see this luxury hotel when its upgrades are all finished. NOW SEE THE VIDEO OF THE LOBBY, BELOW