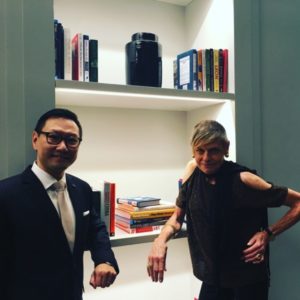 Sam Wong shows off some of the library collection

Yes, you have guessed right. The gal is back in marvellous Malaysia, overnighting in Kuala Lumpur to break up what would be an extra-long journey (as it, the 12.5 hour leg from London is quite enough, especially since it is then an hour in from the airport). To set the scene, above is a fabulous room service snack from the city’s newest luxury hotel, St Regis Kuala Lumpur, namely Mee goreng mamak, street-food noodles with bits in it, and two enormous battered langoustines atop, and the hotel’s signature version of a Bloody Mary, this one an Assam Boi Mary, with sour plum-infused vodka, calamansi lime and spicy Sarawak black pepper, a Borneo pepper that apparently gourmets really crave. Anyway, the excellent Sam Wong is now in charge of this lovely new hotel and he is understandably keen to show it off. 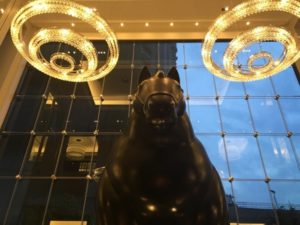 The lobby soars. It is a mottled grey marble sculpture that is taller than it is deep. Either side are striking crystal chandeliers and, beyond, at the end of each side by a black leather picture formed of three rows of three metre-square panels etched, straight into the leather, with polo scenes. The side walls of the lobby have ceiling-high shelves of new hardback books selected by the children of the venerable Chairman of the 208-room hotel, Tan Sri Chua Ma Yu. There are books on how they are made, from jeans to zips, and on florist to Daniel Boulud and Madonna, Olivier Giugni. The eldest of the quartet, Carmen Chua, 32, the dynamic CEO of this operation, is obviously a horse lover; go through to the Drawing Room, at the rear of the lobby and there is a 12-foot high black Botero sculpture, of a blown-up-looking horse on a marble plinth. 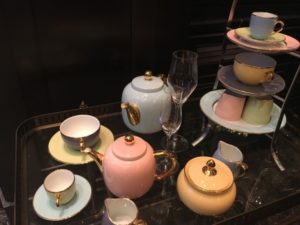 This is the largest sculpture Fernando Botero has ever made, and it weights 2.5 tons. It was cast in his Pietra Santa foundry, shipped to KL’s docks in Klang, put on a 40-foot truck and paraded several times round Kuala Lumpur before, with the help of a 7.5-tonne forklift, being put in through what would subsequently be the wall of the Drawing Room. The walls and floor were then built around the horse – in all the Boteros I have seen in hotels, in Four Seasons Hotel Miami and Grand Wailea Waldorf Astoria, Maui, this is the first horse, and it certainly dominates this space, which comes into its own at afternoon tea time (see the exquisite Legle porcelain, and the cakes on display in a vitrine are pretty spectacular too – the hotel’s pastry chef as well as top chef Nicolas Le Toumelin are French). Already, in three months of operation, the hotel’s private dining rooms are busy with Royalty and other A-lister events, and the Japanese restaurant, which does admittedly only have 16 seats, is booked solid – it is overseen by Tokyo’s youngest Michelin three-star sushi master, Takashi Saito. 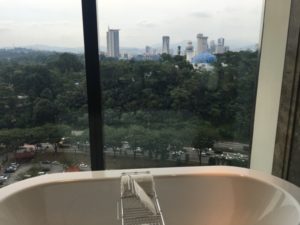 Bathtub with a view

There is also a lovely all-day French brasserie, and a gentleman’s club-feel Astor Bar, with a fumoir. And of course there is a spa, and a pool, and the gym is 24/7. But it is the staff that actually make this luxury hotel. The butlers are superb, marvellously unobtrusive, and charming. The rooms, which start at 650 sq ft, are pretty spectacular, too – designers GA have used palettes of cream, and soft and mid grey, and almost as much mirror as at St Regis Bal Harbour (it is actually more like that Florida hotel, designed by Yabu Pushelberg, than St Regis Singapore, which has a lot of added colour). As Sam Wong says, this is a luxury hotel that is going to go places, namely up the ladder of perfection. NOW SEE A VIDEO OF MY SUITE, BELOW