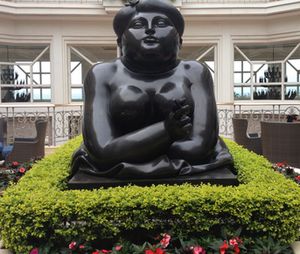 A Botero, about eight feet tall

With such a plethora of new luxury hotel brands erupting, as it were, around the world – from One to Z, via Two and W – why has no-one thought of Botero as a new name?  Marketing would be minimal, says the gal.  Aesthetic consumers would instantly think of substantial structures with a certain artistic feel to them.  Until an entrepreneur does go ahead with Botero as a brand, enthusiasts will have to stick with examples of the Colombian’s brilliant sculptures. Big black anthropomorphic pieces by Medellin-born Fernando Botero can be seen in the lobby of Four Seasons Miami, and at St Regis Singapore. The biggest collection, by far, is at Grand Wailea, Maui. 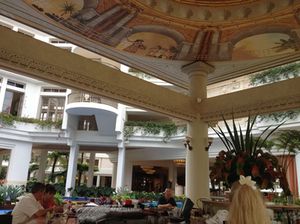 There, at what is now a Waldorf Astoria, the $30 million art collection includes pieces by Leger, Picasso and Warhol, and no less than eight instantly recognisable Boteros.  These are set among lush greenery in the giant open lobby.  Yes, you can do open lobbies in Hawaii (try in, say, London, and they would become instant indoor pools).  Way back in 1991 enthusiast Japanese put up this hotel, with a rectangular lobby that seems like half a football field, open to the sky.  As well as the Boteros and their greenery, in the centre, with a small roof over, is a day-long bar, meeting place of the 780-room hotel. 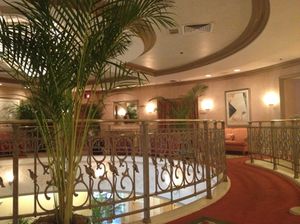 This elegant room is part of spa reception

Those entrepreneurial Japanese also, way back then, installed a spa for the world, or rather two spas, one for men and one for their ladies.  Obviously I only saw the latter, but I am assured facilities are the same (do guys also have a public Japanese-Korean bathing area, with ten-inch high stools and wall-set hoses?). The  thermae pools, with lots of vitality stations, are amazing.  Before my session with one of the 150 (sic, that is total, men and women) therapists, I was offered a complimentary loofah scrub.  Lie down on a towel on a rubber-topped bed and be lathered and scrubbed all over, Finnish style – though last time in Helsinki, the scrubber was a strong-arm old lady, here it was a delicate model-like teenager. 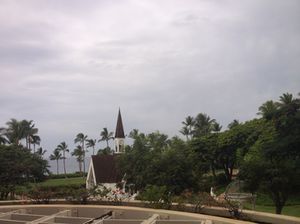 View from one of the 40 spa treatment rooms

And then I was escorted through to the treatment room, one of 40 (sic – I told you this is a big operation) for a fabulous session with all natural products from Eminence Organics, in Hungary.  Dedra used ingredients that included apricot, blueberry, cranberry with pomegranate, cucumber with mint, lychee, mandarin, mimosa, pear and green apple, quince, watermelon and more.  The aromas during that hour – of course I had my eyes closed throughout – made me dream of fruit salad. When I opened my eyes I looked out, and saw, through the open window, the resort’s church. 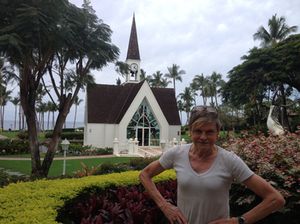 The hotel’s working church, outside…

Yes, the developers, 23 years ago, had also installed, as centrepiece of the 40-acre, beach-set estate, a plausible New England chapel, white wood walls, sloping tiled roof and spire with working clock.  The chapel works, too. It is consecrated, for general services and weddings.  About 125 happy couples fly here, every year, for a destination wedding on the exotic island that is Maui. The hotel can do all the necessary except provide the bride or groom: the only other caveat is that you cannot bring Fido with you to make your marriage complete as dogs, and other pets, are not allowed into any of the Hawaiian islands without going into quarantine. 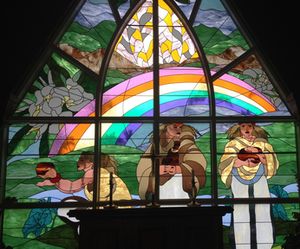 The list of luxury hotels that have working consecrated churches is not long. In Peru there is Orient-Express’ Monasterio in Cusco (where you have divine and all-time memorable Gregorian chants played softly as you breakfast, though obviously not in church).  In England, Soho House’s Babington House in Somerset has an 18th century church that is really popular for weddings.  Some, like Bali’s Conrad (which has a chapel that is simply an inverted V) and Anantara Uluwatu (chapel like a simple glass box), and every top Japanese hotel, have chapels specifically built for weddings. No-one else, however, has the Hawaiian-themed stained glass that you see here, at Grand Wailea – a Waldorf Astoria Resort