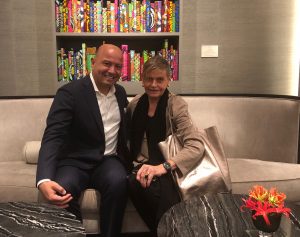 Four Seasons One Dalton Street is a new-look luxury hotel on the lines of Four Seasons Hotel DIFC in Dubai – and like that luxury hotel, this 215-room beauty, which opened May 2019, has a mature sibling. The well-known and highly regarded Four Seasons Hotel Boston borders Boston Common.  This baby, so new that the main bar had yet to be opened when the gal was there, is equidistant for shopping, the Symphony and Back Bay station for the excellent Amtrak services south to New York and on to Washington. Four Seasons Dalton Street GM, Reed Kandalaft, already appreciates the advantages of this futuristic hotel, which occupies ground-21 floors of a 120-metre block designed by I.M. Pei’s firm, Pei Cobb Freed. 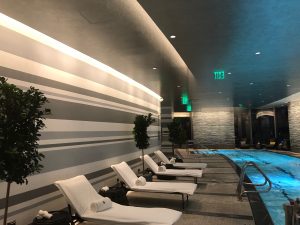 The Manhattan-bold interiors are by Bill Rooney, who obviously sees the world in several, though not 50, shades of grey. Add to this occasional bursts of colour everywhere, coming in the main lobby from three unique wall-set bookshelves (see one, above). Half-hidden by front desk is a two-level trolley of books, a big array of kids’ tomes as well as an eclectic assortment for adults, left behind or exchanged by hotel guests. On another occasion my eye was struck by how vivid the pool looks – the fitness facilities, including the Precor gym, occupy the entire seventh of the building, and are shared with those who live in 174 Thierry Despont-designed residences, above the hotel. 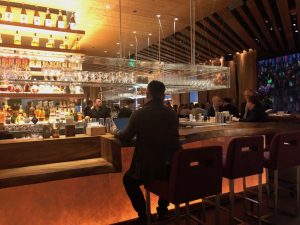 The books are part of a 6,000-book Great American Library, by Yinka Shonibare, a 56-year old handicapped Nigerian-born artist who personally chooses Indonesian batiks to cover real books that are then stamped on their spines, in gold, with the name of someone in that collection’s scope.  Here we have Actors, Dancers and Musicians, honouring first and second generation names appropriate in a particular field. On the Actors’ shelves are such eclectic works as the one labelled ‘Stan Laurel’, on spine of Ronald Miller’s The Affair 1962, bought for 22/- (22 shillings, in old English money). 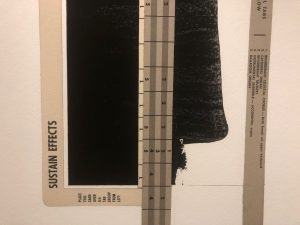 And then there is the colour of Zuma. Wow, what a success.  This outsourced 160-seat entertainment theatre, designed by Noriyoshi Muramatsu, is up 34 stairs from the lobby. Even by 6 p.m. it is a non-stop buzz. After-work young achievers have their pre-home catch up, mature Bostonian couples are already arriving for a taste of Japanese Izakaya, as interpreted by Rainer Becker when, with Divia Lalvani and Arjun Waney, he opened the first Zuma in London in 2002.  We tasted sashimi, vegetable tempura, robata grill salmon, black miso cod, and Elk Cove Vineyards 2016 Willamette Valley Estate Pinot Noir.  On the way out I was fascinated by another success. Until that main bar opens a Concierge Pop-Up Bar runs nightly, yes, at the conciergerie. Beneath three historic clocks, mixologists wait to sell Louis Roederer or Veuve Clicquot, or lagers or wines, including Elk Cove.  Clever. SEE ROOM 2006