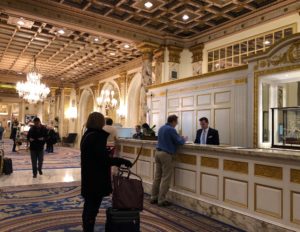 Every great city needs at least one grande dame when it comes to luxury hotels – Hong Kong has The Peninsula, Singapore’s is Raffles, and so on. Boston’s doyenne is Fairmont Copley Plaza, built in 1912 by architect Henry Janeway Hardenbergh, responsible for such other stately hotels as New York’s The Plaza and The Willard in Washington DC. Fairmont Copley Plaza is an old lady who has had the equivalent of an L. Raphael complete make-over: the exterior, seen in a drawing above, remains as-was, but public areas exhibit a billion-dollar sparkle.  And day in, day out people arrive to stay. There are regular business types, and global doctors come to attend Harvard Medical School courses held here, at the 383-room hotel and, says the gal, parents visiting their beloved children studying at one of the myriad of top colleges in the Boston-Cambridge area. 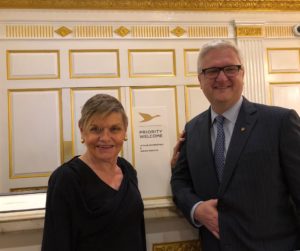 George Terpilowski runs this microcosm that is a city in its own right, Fairmont Copley Plaza. We had dinner in the Oak Room, once a really formal dining area but now a buzz of activity, standing room only and spilling out into the adjacent bar.  Admittedly we were there on a Friday but I suspect all 120 seats are taken every night: there are also bar-counter seats, ideal for singles and for watching big televisions set into the mirrored wall (be here when the Patriots or Red Sox are playing and you may not even find space to stand). Does this all seem incongruous in an historic room with a 40-foot ceiling from which hang seven gigantic crystal chandeliers? No, the effect is akin to Dolce & Gabbana rather than Prada. 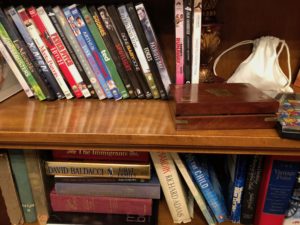 The A4 sheet menus, dated, list more drinks than foods.  We could have had a Copley 75, namely Empress gin, VC, Pierre Ferrand dry curacao and lemon, but no, we played safe with Du Mol Pinot Noir Russian River Valley 2015.  We could have had Oak burgers, Wagyu, applewood-smoked bacon, American cheese, dijon, brioche, but, surrounded at that point by sequinned size-zero local celebrities having glasses of Veuve Clicquot before heading to a benefit, I used a fierce steak knife, barely needed, on my steak and frites, eschewing the steak sauce. I was so lucky George Terpilowski was here that evening: he also oversees Sofitels in New York and Philadelphia. He told me that the Mayor of Boston had personally unveiled the plaque, outside on Dartmouth Street, to Catie Copley, the hotel’s first canine ambassador who had left to frolic in the heavens in 2017: her successor, Carly Copley, is now busily employed taking walks with willing hotel guests. 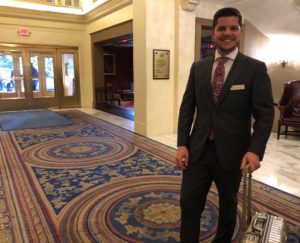 I loved my room 437, which looks directly out over Copley Square, which, every Tuesday and Friday from Memorial Day through to Thanksgiving, is scene of a really serious farmers’ market – you can just see it in the video, below.  437 is also handy for the stairs, 66 in all, up to the rooftop gym (Technogym equipment, and recyclable Avid headsets). It is also on the same floor as the excellent Gold Lounge, run by Jonathan Sa. Cleverly, the lounge is completely self-service. At breakfast, get your linen-wrapped cutlery from a Scandinavian-style rack, choose less-desirable zero-fat packaged or home-made real yoghurts, and so on, and, thoughtfully, there are not only Villeroy & Boch cups but paper cups (as there are too for in-room Nespresso machines).  Also, mindful of the numbers of kids staying at weekends, there is a corner of books and games. This hotel has so many plusses. It is, for instance, only four minutes’ walk from Amtrak’s Back Bay station, and Jonathan Sa insisted on walking me there when I left. NOW SEE ROOM 437