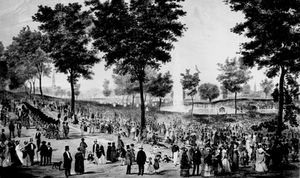 Boston Common, the oldest public park in the USA, has lots of luxury hotels looking over it, says the gal.  It is still a gathering place for locals and visitors, but in the past it was often – well, packed out, as the engraving shows.  It covers 50 acres, bounded by Tremont Street, Park Street, Beacon Street, Charles Street and dates back to 1634. Owners over the years have included William Blackstone, the first European to settle in Boston. He sold on to the Massachusetts Bay Colony, and it was used as a field for cows, until there were too many. Mayor Harrison Gray Otis banned any cows at all in 1830. 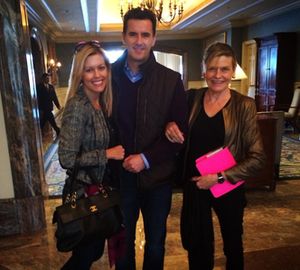 Boston Common has been the scene of riots and events. A big oak tree was used for hanging Ann Hibbins in 1656 – she was accused of being a witch.  Four years later, Mary Dyer was hanged for preaching Quakerism.  This was, indeed, the site of public hangings until the early 19th century, and it was also the city’s central burial ground.  Now, the Common and its adjacent Public Garden has happier associations. Its 1867 suspension bridge, for instance, is a favourite proposal spot. My good friends JB Dowd and his wife Tiffany Dowd got engaged there – as JB says, he wanted a site that, unlike a restaurant, would be there forever. 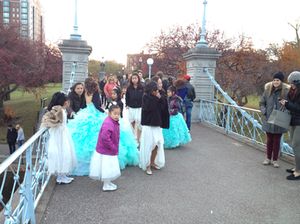 Glamour on the bridge

I go for walk in the park, namely the Public Garden and the Common.  At the suspension bridge, a load of mostly-happy females of all ages, dressed in crinolines, many-levels of turquoise or white frills, the kind of waltz dress that sugar figures wear on top of multi-tiered wedding cakes. The problem today is the sub-zero temperature and these lovely ladies and girls are wearing coats on top of their gowns.  One little girl was so miserable she was crying ‘I want to go home’. Another problem is that there did not seem to be any men … what was happening? 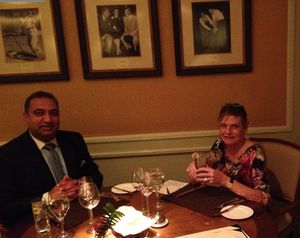 I returned to my lovely warm suite at Taj Boston, looking back down at ‘the park’, and got ready for dinner in the hotel’s Café. Karambir Kang, the GM of the hotel, told me that the seat I am sitting in was the favourite of Ted Kennedy, the most northwest seat in the restaurant so that he could survey the room. Security guards would sit in the far north-east and south-west of the room.  He would start his meals with gin and tonics.  What type?  Gordon’s, always.  Karambir Kang and I both have – small – G&Ts and drink the late Senator’s health. 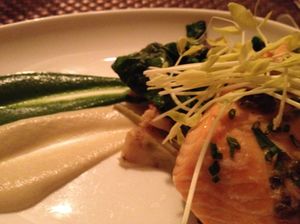 My suite was the favourite of photographer Yousuf Karsh, who lived here with his wife Estrelita. A big photograph of Winston Churchill, taken in 1941, is on the wall.  The 17-floor hotel has been around since 1927, and I wonder which other key people have stayed here… but in today’s world privacy is so vital that even in-room guest books seem to have disappeared.  Yes, privacy is key, despite so much ‘big data’ that make it possible for suppliers to know everything about you.  The head of McKinsey’s travel distribution section wants all suppliers, in this case hotels, to share information on customers with each other – interestingly, this guy, Robert Carey, proposed to his now-wife, here in this very hotel. 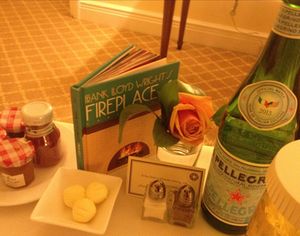 Still-life in a Taj Boston

It is indeed a luxury hotel with unique features. Suites have real log fires, which can be lit by your fire butler.  The menu offers birch, which gives a strong heat and burns quickly; cherry, which is fragrant and slow-burning; oak, which is lightly scented, and maple, which gives a sweet aroma.  Before checking out, I make a little still-life to remind me of the room – it includes one of the suite’s books, a history of Frank Lloyd Wright’s fireplaces. At that, knowing my driver is already waiting downstairs, I leave.  It is 6.15 a.m.