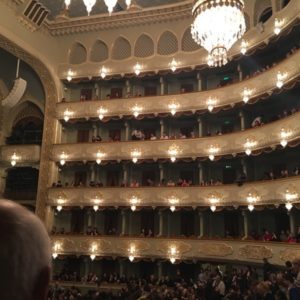 All six tiers were full, two rows in each, for Anna Karenina

Georgia has just over four million, entire population, and since Network is their middle name, every A-lister knows everyone else, which will be great for getting a luxury hotel known by word of mouth. Two nights last week, Friday and Saturday, April 15th and 16th, they all emerged from their Fabergé worlds, be they in Tbilisi or, in the case of the diaspora, Moscow and St Petersburg, plus London and New York, to go to the ballet. Boris Eifman, described as the leading ballet master of today, had brought his eponymous St Petersburg-based troupe to perform his version of Anna Karenina. Forget classical ballet. Everything to do with Eifman is psychological ballet art (not the gal’s term – she would say a journey from ballet to the art of wringing the emotions of everyone in the audience). 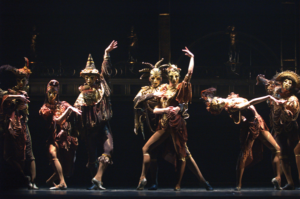 Amazing costumes, even for the corps de ballet

Dressed by Vyacheslav Okunev in constantly-changing magical garb that culminated in the 24-strong corps de ballet rotating one white arm as if trains in motion – Anna Karenina dramatically falls off an upper ledge, ‘under the train‘, the ballet almost took precedence over the surroundings. But not quite. The six-tier opera house, which dates back to 1851, re-opened this January after a $40 million renovation, and during the interval the full-house wandered its gorgeous rooms. The women, of all ages, were nearly all immaculately dressed, with Paris and Milan creations vying with those of designers with Georgian roots, including Amy Smilovic of Tibi. Everyone seemed to know everyone else. There was more kissing and hugging, including of most of the Georgian cabinet, than you might see at a society wedding. 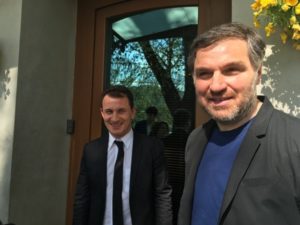 Adjara Group Hospitality, already Georgia’s leading hotel group, what with its ongoing partnership with IHG and with its own Rooms Hotels brand, is one of the business sponsors of the opera house. The group Chairman, Teimuraz Ugulava, was there, as was his CEO, Valeri Chekheria, who was star of the night overall when it came to who knows who (with IHG’s Angela Brav and her Moscow-based colleague Aron Libinson, I was in his box, number ten, which meant Chekheria could greet Georgia’s most famous ballerina Nina Ananiashvili in box 11, and friends from St Petersburg and elsewhere in box nine), and later, at our midnight snack cooked by the Berlin-born chef at Rooms Hotel Tbilisi, Henry Zimmermann, the American ambassador was at the next table. 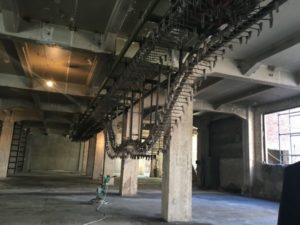 Adjara will, sometime around a year hence, have another spectacular luxury hotel to offer. InterContinental Tbilisi is being converted from state printing works built in the three decades from 1940. Outside, flowering wisteria grows up around windows of its 200 rooms, and across one of its courtyards an intriguing door leads to a mammoth bunker that will be its wine cellar. The hotel will have a modern French bistro, and, especially to attract Georgia’s networking aesthetes, a gourmet restaurant by an up and coming Iberian-peninsula chef who has three Michelin stars and opens in London shortly. There will also be a unique bar: yes, other hotels have printing press conversions – think One Aldwych London – but none has the old overhead racks, like some cleaning establishments today, used in former times to dry just-printed newspapers. The rack shown here will be incorporated above the hotel’s bar counter, say the Adjara duo, Messrs Ugulava and Chekheria, who often finish each others’ sentences, or, to a non Russian speaker’s mind, appear to.