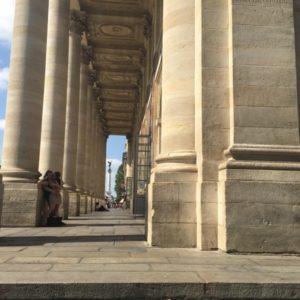 Side view of the Grand Theatre

Bordeaux is, as its name implies, beside the water, namely the mighty La Garonne – and, apart from Paris, it has the highest number of preserved buildings anywhere in France. Take, says the gal, its beautiful Grand Théâtre, shown above in a photo shot from suite 215 at the city’s luxury Hotel InterContinental Le Grand Bordeaux. The Théâtre was finished 1780 by architect Victor Louis, 1731-1800. It was a conceived as a temple of the Arts and Light and its neo-classical façade has 12 statues of the nine Muses and three goddesses. Whichever way you look at it, this building, now home to both the Ballet National de Bordeaux and the Opéra National de Bordeaux, is absolutely gorgeous. 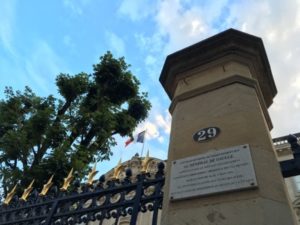 The current Mayor of this city of around a quarter of a million is Alain Juppé, who an increasing number of people say might be the next President of France. Bordeaux has long been associated with key names. General de Gaulle flew into Bordeaux-Mérignanc airport on September 17th, 1944, directly after the Liberation – see the building where he held meetings, right (fascinating old photos show him being driven, over tramlines as today, through solid-block crowds, on a visit to Bordeaux on May 15th, 1947, when he came to visit then-Mayor, Jacques Chaban-Delmas – checking these historic photos, I am struck by the similarities, height, face and commanding presence, between de Gaulle and Tata legend, Rajan Tata). 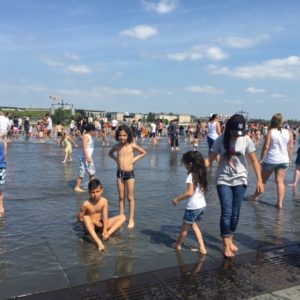 Alain Juppé, who was actually Prime Minister 1995, has been Mayor here since 2006, when he was elected for the second time. He is credited with so much, including installing what is said to be the world’s first significant public paddling pool, the miroir d’eau. Set into the corniche right by the Garonne, with tram lines and then the gorgeous crescent-shaped Place de la Bourse behind it, it measures 400 feet by 90 feet: it is only two inches deep when full so it is not likely to be upset even by Brussels’ ridiculous ‘elf-n-safety regulations, and it was dry when I went down to it and walked across, at 6.30am. Yesterday, however, it was light and sound of an all-ages party – see the video below, if you want more of it. 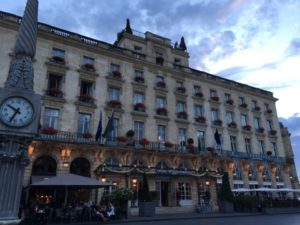 The Mayor has also been extremely influential element in getting what is now InterContinental – Le Grand Hotel Bordeaux into its current significant state. What is now the city’s prime luxury hotel, directly across place de la Comédie from the Grand Théâtre, is owned by business entrepreneur Michel Ohayon, who also owns Trianon Palace Versailles, a Waldorf Astoria Hotel, and the Sheraton at Paris’ Roissy-CDG airport. Here in Bordeaux he persuaded FIB Financière Immobilière Bordelaise to help fund the restoration of a private hotel, revamped by architect Victor Louis in 1850 but empty for some years. Michel Ohayon bought five adjacent houses to give substance, and with the help of architect Michel Pétuaud-Létang and dark-inclined designer Jacques Garcia, he was able to open what is now a 130-room luxury hotel in 2008. NOW SEE THE MIROIR D’EAU VIDEO BELOW