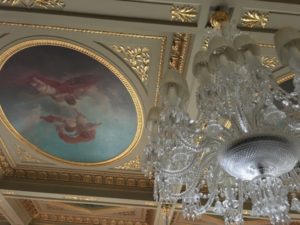 Here is the view, above, of Bordeaux from the sixth-floor rooftop of the luxury hotel that Michel Ohayon masterminded and opened in 2008, now InterContinental – Le Grand Hotel Bordeaux. The 130-room icon of the city has theatrical interiors by Jacques Garcia but thankfully he has not tampered with the few original elements that go back to 1850, when Victor Louis redesigned what had originally been two private houses. See left, and in the video, the breathtaking painted and gilded ceilings and walls of the main meeting room – what a divine place for a wedding, especially with the enormous Barrat chandeliers. There are other meeting rooms too but this, says the gal, is definitely the pinnacle. 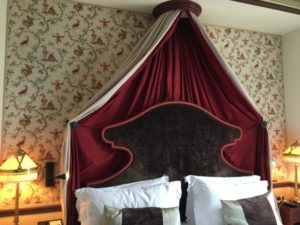 Ideally, try and get a room facing across place de la Comédie to the city’s Grand Théâtre, another Victor Louis masterpiece. All bedrooms, however, are plush with velvet, and dark colours, and patterned wallpapers, and the ogee-shaped bedheads that are a Jacques Garcia penchant (I am not quite sure how he resisted doing them at La Mamounia, Marrakech). But the beds are really comfortable, and the service everywhere is faultless. I do not remember ever before having raved about bellmen. Charles and his colleagues are just outstanding, nothing is too much trouble, my car was always waiting exactly when requested and they quickly set the sat-nav for me, even though it was in English. Talking of cars, many come here on the hotel’s classic wine packages – stay two nights, visit such beauties as Ch Haut-Brion and Ch Margaux, and dine chez Ramsay. 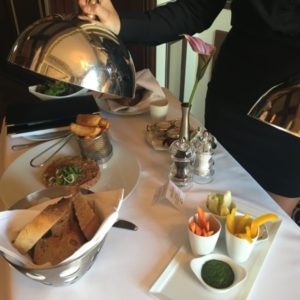 I am told that 65% of guests here come for the food and I am not surprised. Even my room service dinner, a simple tartare with frites, was a work of art. At breakfast they remember where you like to sit, your coffee preference, and they bring you an English language newspaper. Breakfast is the mezzanine level above what becomes, at lunch and dinner, the inside-out Le Brasserie Gordon Ramsay. It was only re-opened last month and it has already built up such a regular following that it does over 300 every day, between both meals, and when I dined there, outside under a big umbrella, they turned away dozens who did not have reservations. What does Our Gordon serve in a French brasserie? Burgers, GR-style cheeseburgers or Rossini-style, with foie gras and truffles, are best sellers, as are local oysters, local Prunier caviar, local snails. 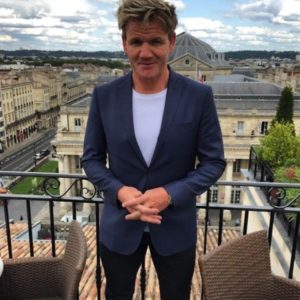 Fortunately I had chosen an heirloom tomato side salad (green, red and yellow varieties, with capers) to start as my Arcachon sole, from 30 miles to the south-west, was huge, and having replaced its accompanying potatoes with fried onion rings resulted in five enormous doughnut-sized hoops hanging from a horizontal pipe on a vertical-C frame (and yes, I ate them all). What with a glass of Pessac-Léognan Les Hauts de Smith 2012, in a stylish C&S Sommelier glass, and dining off Bernardaud in the fading sun, I felt this was another moment of modern luxury. It was Gordon Ramsay’s idea, incidentally, to take over the brasserie: his restaurant at Michel Ohayon’s luxury Versailles hotel has been a great success for some years, and he opened, here in the Bordeaux hotel, Pressoir d’Argent, September 2015, and gained a Michelin star this February. I will be back – Pressoir is closed Sunday and Monday, but, similarly, all 42 seats are booked every other night (I also need to get back to experience the summer-only rooftop Night Beach lounge, which looks divine). One final comment on Gordon Ramsay. He had told the hotel, ahead of media meetings to launch Pressoir, only to get English-speaking journalists. He evidently then had total French immersion, covertly, as when he arrived he spoke French, including idiomatic language, nonstop for two days. NOW SEE THE PANORAMA VIDEO BELOW