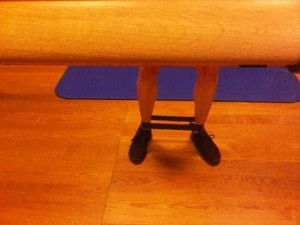 This is a tale of luxury hotels and total fitness and being on top of the world.  Part of this scenario can take place at B-5 level – one presumes five floors below ground – at the stunning Bulgari Hotel London.

Here, next to the hotel’s own Technogym workout room, is the base of Bodyism, the best-ever body outfit, run by Australian James Duigan.  He was back home when the gal went to call.  He, or rather his wife, was having a baby, so probably Bodyism will give way to Babyism, at least temporarily.

No matter, Lee and the rest of the team are there, to push, pull and cajole you into making the most of yourself.  In my case this included at least five minutes walking around with an extra-strong elastic band binding my legs together. 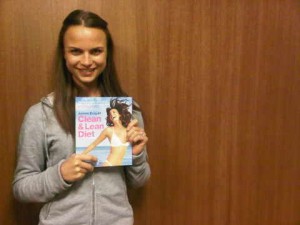 I had an hour with Nathalie Schyllert, a former professional Swedish ballet dancer who turned model who turned fitness instructor (she is, I heard later from one of her regular customers, the toughest of the team, she never gives up).

For 60 minutes I stretched here and pulled there and worked on aerobics and tummy and finished off by lying on ‘the bed of nails’, which is just that, a mat with plastic nails protruding.  Lie on it face up for an overall tingling of the spine.

It is Nathalie, incidentally, who is shown in all the exercise photos in James Duigan’s book Clean & Lean Diet, which not only has a gorgeous cover and lots of photos of Nathalie inside, but the advice is reasonable and sensible.  I like the way foods are listed as Bad, Better and Best, say Ketchup, Pesto, Fresh mashed avocado. 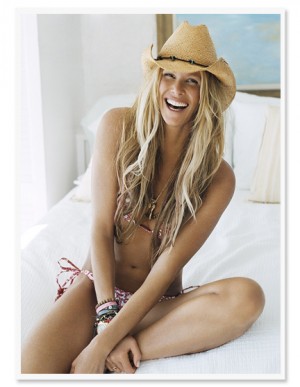 Elle Macpherson is another Bodyism aficionado

Elle Macpherson, The Body if ever there was one, says Bodyism ‘is the only one I turn to when I want to get in shape fast’.  I know other Bodyism fanatics include model Rosie Huntington-Whitney and the Australian soap actress Holly Valance, who conveniently married Nick Candy, developer of England’s most expensive apartment block, One Knightsbridge, just across the street from Bodysim.

Nathalie tells me her youngest regular is 16: her oldest is Hugh Grant’s father, who is 86.  Perhaps they are more tuned in that I was to Nathalie’s farewell cocktail, a kind of energiser of, I think, wheat germ and, I know, broccoli. 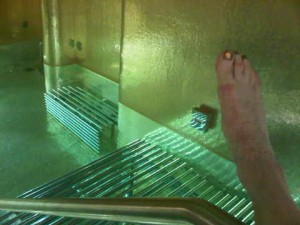 The vitality pool is lined with tiny gold Murano tiles

Anyway after that I went into the hotel’s pool, also down on B-5.  It is a full 75 feet long, formed of tiny green Murano tiles, and at one end is a gold-lined vitality pool with seven different stations.  This is undoubtedly one of the ten most beautiful indoor city pools anywhere – it deserves to win lots of design awards.

Fortunately I had it all to myself.  There are cabanas, with wispy curtains, all around.  The whole thing is decidedly whimsical.  I decided this would be an ideal luxury hotel for a girl stayng alone in London.

Lots of workouts, lots of swimming and, of course, lots of time for the mammoth ESPA (anything ESPA has got to be good). The Bodyism effect can continue right through dinner. 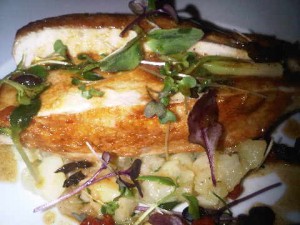 Chicken with lemon and crushed potatoes

Look at the – black-cover – menu and the – black-clad – waiter will explain that dishes with little circles on them are Bodyism choices.  Clean & Lean has no fewer than 14 chicken recipes in it, but probably none can be as good as the dish I had here, at Il Ristorante, cooked by the English-Scottish chef Robbie Pepin.  Chicken breast on crushed potatoes, with lemon. 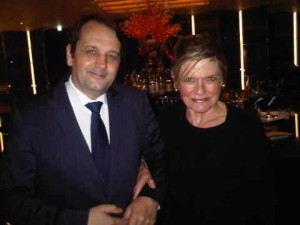 I could smell its aroma before it got to the table.  But now we have a problem.  Look at Clean & Lean and it says wine is Bad, packed with sugar, yeast and alcohol.  Better is organic wine, which has fewer pesticides.  Best is gin & tonic with fresh lime.  But can you imagine drinking gin & tonic here, at Il Ristorante, especially when you are with one of the world’s best-connected and most savoir-faire of hoteliers, Sylvain Ercoli.

So of course he chose not an English gin & tonic but, to go with the chicken that he too was having, a French wine, and not any old bottle but a 2007 Ch Grand Puy-Lacoste Pauillac, and very nice it was too. 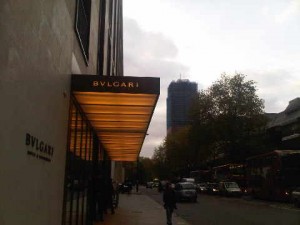 Bodyism would certainly not have been impressed, either, by the hotel’s cigar lounge, which Sylvain showed me afterwards.  It is rather creepy to see a sealed off room just for those who want to shorten their lives by inhaling Montecristos or other desirable, and expensive, cigars.

I would personally spend my time on the main floor of this discreet hotel.  The bar is a unique horseshoe-shaped sculpture, about 24 feet long, formed of beaten metal.  You find yourself leaning against it, just as you do at The Table That J.J. Built in Hong Kong.

And the front part of the main floor, the lounge, with a macaroon corner, and a fire that 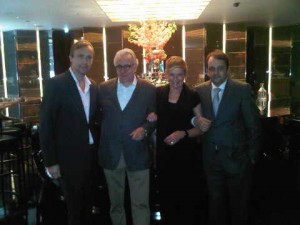 miraculously ‘burns’ all day long, is also a gathering place.   Here you find meetings going on (the acoustics are admirable so no-one can overhear).  In fact I was having an informal meeting, with Philippe Kjellgren, when Sylvian Ercoli, he with such an amazing network, walked up with Alain Ducasse, so of course we had to go and have a group photo taken.