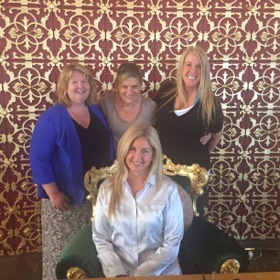 The queen of Jumeirah Europe with Lisa, left, and Nancy

It was time to visit three very different luxury hotels in an area that was completely new to the gal – Bodrum, the Turkish peninsula that is rivalling St Tropez, Ibiza and Mykonos as the summer hot-spot. Yes, that is true. One of the most in-touch top hoteliers spent his 2015 summer hols half on Mykonos, half in Bodrum. Especially late June through to the third week of August, there are about half a million on the peninsula and all resorts in the entire Bodrum area seem to run at 100 percent occupancy, and even if you can afford €500, a day, for an overwater cabana, as at one place, you are lucky if you can find a proper bedroom for the night, even if you can pay for it. By the last week of August, everything begins to slow down and by end of November the population returns to its usual 50,000. 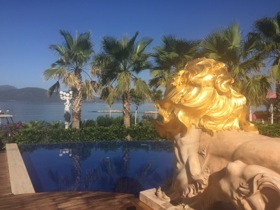 I coincided at Bodrum’s glitziest hotel, the 135-room Jumeirah Bodrum Palace, with three friends from the company – Nancy Wolff and Lisa Zoretich, both visiting from Dubai, and Doris Greif, who heads Jumeirah‘s European operations and at the same time is GM of Jumeirah Frankfurt. I arrived at night, on the direct London flight (summer-only, like all international flights, sadly) and, after paying my £20 visa-on-arrival, it was flowers in the arrival vehicle and, once there, Möet white or rosé, and fab Turkish food, a mezze and grilled fish. We looked down the diagonal-steep landscape as jets d’eau to rival Geneva’s but here day-glo coloured, soared into the black sky. I was far too late to bed, in the upper part of two-floor, two-bedroom 62, a 1,950 sq ft Maldivian villa with a 65-foot long L-shaped very private pool. 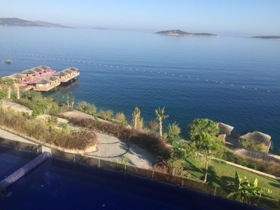 Looking down to the sea, floating cabanas to the left

In the morning they opened the gym for me an hour early (it is part of the enormous Talise Spa) and later we went on a tour. Think every traditional crystal chandelier in the Ottoman Empire, and double the number – some are hanging down the stairwell of the three-floor Palace villa, which has six ensuite bedrooms, an indoor pool and two outdoor pools, one fresh and one seawater. If you want to be more discreet, take one of the eleven Majestic Suites, which only have four bedrooms. Not surprisingly families, especially from Lebanon, Kuwait and Saudi Arabia, just love this place, though what some of the traditionalists think of the numbers of voluptuous females, clad only in wisps of blue curtain, who appear lifesize on painted internal columns is an unanswered questions. 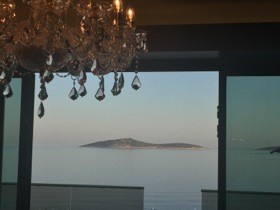 Stay at this luxury hotel for stunning views, from each and every one of the rooms, far down to sea, and for some fascinating sculptures in the meticulously-tended gardens, 27 acres in all. Stay for a seemingly endless breakfast buffet, which even has about three dozen cheeses and the same number of pancake types, and goes on until noon, which gives plenty of time to admire the chandeliers overhead. And then, if you do not want to take the 116 steps, or a buggy, down to the beach, count the number of precious carpets scattered in the main lobby, the length of a curved football field. With what to compare this experience? Radisson Royal in Moscow springs to mind, as does Turkey’s own Mardan Palace, Antalya – not coincidentally, both those are masterminded by the same man. Jumeirah Bodrum Palace is now owned by a passionate former hotelier, Vedat Dalkiran, and he has cleverly brought Jumeirah in to make it work. Lovers of the ornate rather than minimalism will hope nothing is changed when it re-opens for the 2016 season.