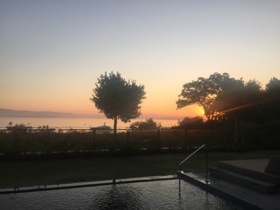 The newcomer on the chic Bodrum scene had a protracted birth. For a long time it was hinted at. Would anyone really be able to build at Paradise Bay (Cennet Koyu) on the north of the Peninsula, near Göltürkbükü. Hilton Bodrum must have thought it had exclusivity in the area but then lo and behold, says the gal, on 7/7/2014 Mandarin Oriental Bodrum opened its doors, and it has seen an incoming flood of money ever since. How Brazilians and Mexicans, and so many others, found out about it and booked, quick, was a source of some fascination to the GM, Nejat Sarp (oh, the power of the brand, he says). Having been once, they want to come back. Look at this sunrise from room 209, over its outside pool. 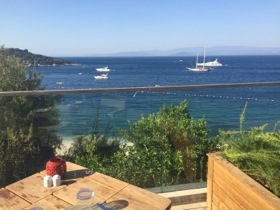 Looking down at just a few of the (smaller) yachts

By day, you get a better view of the superyachts. The number flooding the Bay in high summer, apparently, rivalled Monte Carlo‘s harbour… there is a special arrivals jetty for guests coming by boat, and another arrivals area by the helicopter landing pad. Yes, you have got the picture. This is a well thought out mega-project. As well as 80 bedrooms and suites, there are 23 letting apartments, and some of the privately-owned villas (‘the great and good, as well as many royalty, from around the world’) are sometimes rented out. At high summer over 900 work here – it drops to 120 in winter. Add to this number the St Barths-types running JuJu beach: one of the three beaches is leased out to Babylon, which allows outside to pay day membership, €60 per person, for that beach, and its lovely lawn, and the opportunity to patronise, at additional cost, the JuJu outdoor restaurant and bar with DJ. 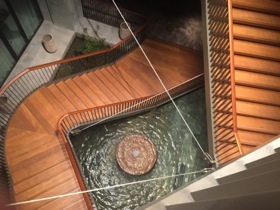 An unsupported staircase, held only by metal ropes

Hotel guests can use the JuJu beach, and their own beach, for free of course (the third beach is for the owned villas). They have pools galore, outdoors and in, and a big spa with a really good Technogym. Of course the equipment is the Antonio Citterio latest, for it is he who designed the entire interiors, and they are brilliant. Bedrooms have all-teak or all-oak walls, and some of rough stone, and plain marble floors with beige throw rugs. Hub of public areas, for me, is this theatrical staircase, supported only by metal ropes. His restaurant designs, for Assaggio Italian, Kurochan modern Japanese and so on, mostly have indoor areas with fires that are not used summer long as it is so pleasant dining out – there is a dedicated breakfast room (see what I mean about the thoughtfulness that has gone into this whole place?). 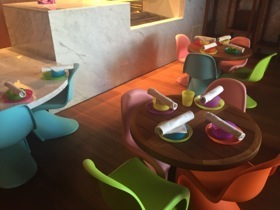 Kids have their own room at the breakfast restaurant

Little ones even have their own room off the main breakfast restaurant. During the years of planning, owner Vedat Asci, a textile-parts magnate who evolved into real estate, must have discussed forever, with his advisor Omer Isvan of Servotel, and others, who would be using this luxury hotel. Nearly two years before opening the pair enticed Turkish-Canadian Nejat Sarp to come and see the project – he had left Mandarin Oriental to head the hotel and food operations for the Vancouver Olympics, after which his mega-skills were demanded by the World Cup in Brazil, the Sochi Winter Olympics and then Istanbul’s bid for the 2020 Olympics. But as soon as he saw the site, Nejat Sarp says, he was hooked. He has an owner with passion that rivals his – Vedat Asci personally ordered over 1.2 million plants and bushes, and presumably blades of grass, knew where every one should go, and during construction he was on-site every day, doing longer than labourer’s hours. Now Vedat Asci, helped by his three daughters, is planning Mandarin Oriental Istanbul, and goodness knows what will come next, both here, Bodrum, and there.