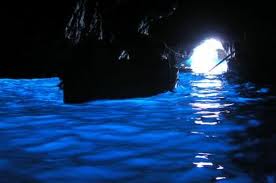 Grotta Azzurra, also known as the Blue Grotto, is the main draw (together with Brand Capri) for up to 7,000 who arrive on the tiny island of Capri every day during summer.  And tiny it is, four square miles in all.  Run around it, swim around it? No way.  Sail around it, and you can do it in a couple of hours.  Drive its narrow roads and be careful.

The gal hears a story of a van that was bumped into – the other’s fault, of course – and it needed to be taken to the mainland for repair, and then was only allowed back on the island after talks with the mayor, Ciro Lembo.  Some of this man’s ideas are great; he is setting up a DNA database so owners of all dogs who mess in public areas can be traced.

Anyway, back to the Blue Grotto. It is lit by a five-foot diameter waterline opening, just large enough to allow rowboats in.  There is also a second hole, about ten times as large, below this entrance, but you cannot see this hole, you are only aware of the light.  Put your hand in the water as you are rowed in and your hand ‘glows’.  Obviously visitors have to be rowed in – you lie flat to get in through the entrance. 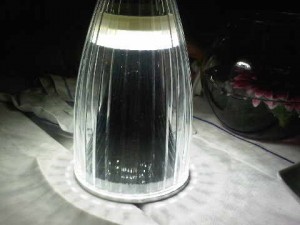 More light.  The tables outside on the terrace at dinner at beautiful J.K. Place Capri each bear what looks like a Bellavista prosecco bottle.  It is in fact a light, beaming enough to allow you easily to read the menu. The lights are re-charged at night.  The table is set with real linen from 100% Capri, one of the four great Capri brands (the island Capri itself, its Blue Grotto and, of course, J.K. Place Capri).

In 2000 a linen design and manufactury was set up by Tony Aniello and his wife Sunny, who later had the promotional help of Mexican-born model Grace Alanis.  Now there are 100% Capri stores here on the island, and in Bal Harbour, Los Angeles, Rome, St Barth’s, Sicily.  They do fashion, for gals and tables.  The linen cloths at J.K. Place Capri are embroidered with ‘100% Capri’: the fine linen napkins have the brand’s distinctive blue-edged band. 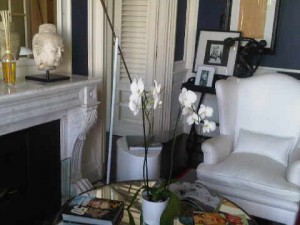 The public areas of J.K. Capri are like rooms in a gorgeous house

Lorenzo, the wise and highly-experienced maitre d’ at this luxury hotel, wears a dark blue suit striped with white.  His is the only tie one sees in this place.  Blue and white, by contrast, you see a lot of.  Pale duck-egg blue, which surely will soon be known as J.K. Place blue, and white stripes adorn distinctive shopping bags and things around the hotel.

Lorenzo brings nibbles, and yummy breaded mozzarella cubes.  We are sent amuses, single breaded prawn on spinach.  This is comfort food, we all agree.  No-one in this home – gosh, is it really a hotel? – wants Michelin. I start with orange-marinated raw seabass topped with fresh fennel slices. 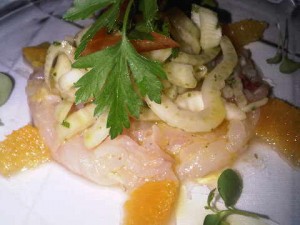 Who can eat anything but fish, here on a small island with fisherfolk obviously all around?  I go on to a slab of cod cooked at a low temperature with a barely-visible puree of lemon-flavoured potato. We drink Giuseppe Apicella Costa d’Amalfi a’ Scippata Riserva 2007.

At the next table, hardly-visible from any other table than ours, a Hollywood celebrity has slunk in, behind ultra-large dark glasses. She is with her boyfriend, part of the Theroux clan, also behind dark glasses. The bodyguard strides in, very obviously, to sit at a nearby table by himself.

He is very busy throughout the meal as she seems to spend most of her dining experience not talking to Mr Theroux but texting bodyguard with instructions and he then forwards these texts to the hotel management.

Only one person to go into their room.  Only the maid they have already seen. Only go in between this hour and that hour.  They want to extend their stay, same room, by three days (this at a time when the hotel is running 100 percent occupancy).  Who would want to be a General Manager dealing with celebrities? 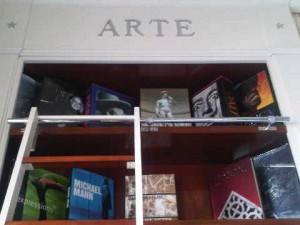 The library is set with heavy and exciting books, floor to almost-ceiling

But the 20-room hotel is so peaceful you cannot believe that there are 40 people staying here in this luxury hotel. On the lobby level, public rooms lead one to another, all with dark wood parquet floors and ivory wall-highlights and doors.Nearest the harbour is the all-ivory library, with floor to ceiling Taschen books and a self-standing mega-tome on Helmut Newton.

A lavender-blue games board sits on the coffee table, near a two-way working fire, which also looks into the neighbouring room which, like all the other rooms on this floor, has wall panels that, with the ivory outlining, give a Wedgwood effect. Moving from the library there are two more rooms, midnight-blue walls, that artfully, are crammed with Buddhist, Roman and Greek statuary.

The end is the ‘dining room’ which has pale lavender-grey walls on which hang a collection of white-framed Greco coin moulds. In the centre is an enormous single-legged rectangular dining table with a four-foot-wide brown-framed chandelier over. 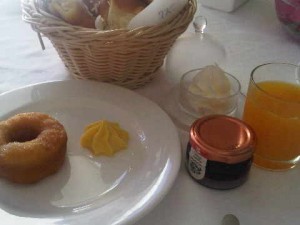 A delicate, best-quality breakfast buffet is complemented by a courtesy doughnut with a dollop of bright yellow cream

At breakfast this table is set with a delicate array of highest-flavour products, including the mozzarella and ricotta that visitors to Italy quickly find addictive as a way to start yet another day in paradise. A basket of Italian-type rolls is brought to the table, with complimentary doughnuts and side dollops of yellow cream, and, under a glass cloche, a swirl of absolutely-white butter.

Jams are local, Azienda Agrimontana, and the coffee is some of the best in a long while, Natex filter.  With gentle easy-listen music as a background, and the chance to sit inside or out on the sunny, or shaded, terrace, is there any more agreeable way to get that paradise day going? 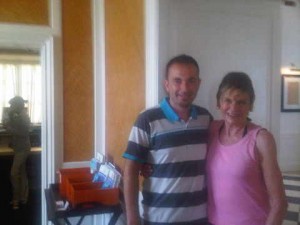 Having handed over to GM Simone Giorgi, Samuel Porreca now heads for Rome

All good things have, alas, to come to an end.  Samuel Porreca, who opened this luxury hotel in 2007, is leaving for his next posting, to open the J.K. Place in Rome – he has handed over here to Florentine gm Simone Giorgi, who joined from Marcello Pigozzo’s Il Salviatino on the outskirts of Giorgi’s home town, Florence.  So Porreca heads by jetfoil for Naples, to travel on to Rome, and I head by jetfoil to Sorrento, for the next stage of this exciting life.