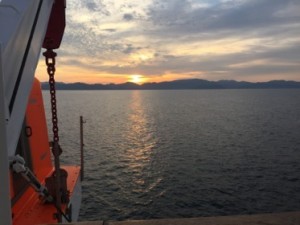 Sunrise as we sail to Hagi

Today is Hagi, home of fugu blowfish. The gal is, as always, up early (the best routine at sea is to have wake-up tea brought by the butler at six, sharp, and then head up to the seventh deck of the floating luxury hotel known as Silver Discoverer to watch the sunrise, and then read The Economist while pedalling furiously on one of the three Technogym bikes). Gym-goers early morning get into a routine by Day Two. Here I share the facility with an ultra-fit Australian woman who always has the running machine: at home, she says, she rows seriously, and when she started she found she was losing so much weight her skirt literally fell off one day. 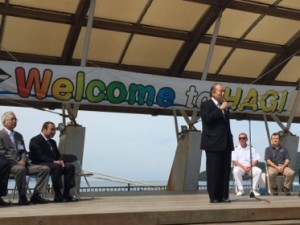 This is the first time Silver Discoverer has visited Hagi, and therefore, by tradition, a welcome ceremony is planned. The Mayor, Kōji Nomura, plus the head of Hagi Tourist Bureau and other dignitaries sit one side of a stage, with the ship’s Ukrainian Captain and Indian Hotel Manager, and the brilliant Zimbabwean head of the expedition staff Moss Hills, on the other. The Mayor makes a fine speech in fluent English and presents the Captain with a ceramic plaque, representing a local speciality, the city flower, a camellia. In return he is given two wrapped bottles of bubbly and everyone bows to each other and, compèred by a young English woman who studied Japanese at university, we watch four mature ladies, with white-painted faces, full hair-dos and deep purple kimonos, doing a dance depicting distaff power while men are at sea. 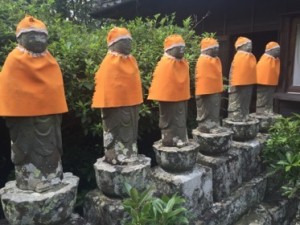 At one point the three-little-maids-from-school each take up a mop with a floppy top which, when swirled, looks exactly like Donald Trump‘s hair. And then we board buses. We go to Tokoji Temple, built in 1691 by Yoshinari Mori, the third Lord of Hagi who was later buried here, together with all his family members, and the fifth, seventh, ninth and eleventh Lords, with theirs. Its quiet serenity is the perfect accompaniment to more sculpted greenery (living, but it looks artificial because every blade and leaf is exactly right for balance and form). On the way out we pass a line of little statues, dressed in orange, memorials to Meiji ancestors. We walk around the ruins of Hagi Castle, and the marvellously-kept Kikuya Residence, a traditional house built in the early Edo Era for the government’s field survey inspectors. Shoes off, put in plastic bags, carry them until we leave to go into the Residence’s garden, another meticulous affair. 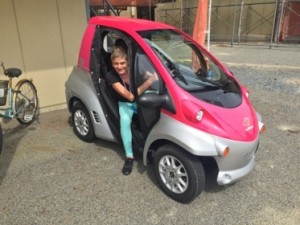 Sorry, no room to give you a ride

The Kikuya family can be traced back to the 14th century when they were, like one in 20 of the Hagi population, samurai, a caste that was high up in the pecking order. The emperor, surrounded by court nobility, was a figurehead: next came the shogun, the military chief and effective dictator, and his feudal deputies, the daimyo. Then came samurai, followed in descending order by peasants, craftsmen and merchants, surprisingly low-ranked. As we then all lunched in a traditional restaurant, with multi-courses including sashimi, tempura, cook-your-own pork, miso soup and sticky rice, an adventurous fellow traveller whizzed up in a Toyota electric car that a kind (modern) merchant had loaned him, free, for a couple of hours. Time passed far too quickly and we were back to our luxury floating hotel.