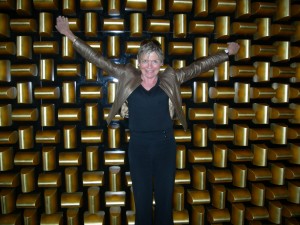 The gal is a gold freak (well, who is anything but?). Designer Adam Tihany apparently piled 1,516 mock gold bars to form a wall in the lobby of Mandarin Oriental Las Vegas.  This is one of those occasions when you take someone else’s word for it.  No time to count, for oneself.

Time for dinner, at the luxury hotel’s Twist by Pierre Gagnaire, overseen by the talented chef who has restaurants at Hotel Balzac, Paris – and InterCon Festival City in Dubai, and Mandarin Oriental Hong Kong and goodness knows where else.  Here in Vegas he has three- and six-course tasting menus, but, whatever, you eat divine. 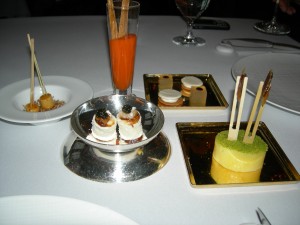 Start with flavoured grissini sticking up out of an orange paste, and mini-bite Roquefort lollipops, steamed Chinese buns with caviar, filled potato crisps that look like miniature Catherine wheels on wood sticks.  The butter is, of course, Jean-Yves Bordier, like Negresco in Nice.

Here, the sommelier is a sommelière, one Julie Lim, who has a glass-walled mezzanine cellar, up 21 steps from the main restaurant (yes, the gal can count, but not when it comes to gold bars.

OK the meal, a cod cake with martini glass of Bloody Mary sorbet, say, go on to beef, your choice from California, Idaho and Nebraska, with a Laguiole knife. No room for dessert, but more mini-bites are offered on the house, this time sweet rather than savoury.

Mini-bites, love’em.  How about the tray of one-mouthful capreses at The Peninsula Chicago, ten years old, maturing magnificently and no sign of troublesome teens.

Lovely teacher, sorry GM of this works-for-you, works-for-everyone luxury hotel, Maria Zec threw a congratulations party, with everyone under the sun, including Ken Hom and, all the way from Hong Kong, Peninsula’s bosses, the Hon Sir Michael Kadoorie, CEO Clement Kwok and COO Peter Borer. 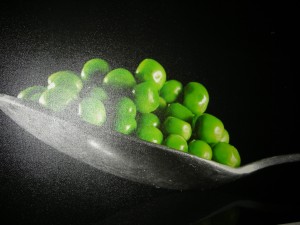 Bite-sized sprouts, on wall in Houston

Quality rather than quantity. Back in Texas (land of the Big and Good in so many cases), and to more of those aforementioned baby vegetables from chef Peter Laufer’s garden at InterContinental Houston.

At his chef’s table, by the way, as well as the overhead spoon chandelier there are enticing blow-up images on the wall of produce, including sprouts, oh so suitable for this time of year.

And sprouts of course are just one of the megafoods that contribute to a healthy lifestyle. 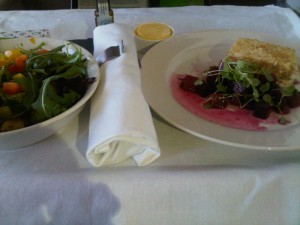 I am writing this while flying to Los Angeles, and I am thrilled to see British Airways’ new Height Cuisine concept. Great name, and there is concentration on umami, the fifth taste (after sweet, salty, bitter and sour – identified in Japan, it offers a pleasant savoury taste and it is found naturally in, say, seaweed, mackerel, tomatoes and Parmesan).