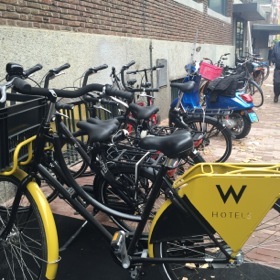 For the time being, says the gal, an important non-edible feature of W Amsterdam, a hotel that opened on Spuistraat two weeks ago, is this hotel bicycle, parked – or perhaps dropped – with many others outside the building. Knowing the brand, when finished this will indeed, be a another luxury Amsterdam hotel. So far, what was a six-floor, triangular-shaped brick telephone exchange is merely half-converted. Climb around labourers to get into the hotel. Go up to the sixth-floor lobby and general eatertainment area and it is quite a buzz (particularly Mr Porter steakhouse, which has an enticing glass-walled display of ageing beef cuts). Go down to one of the all-grey corridors to see bedrooms, and make sure you choose one that faces out, rather than inwards to the triangular inner-court. 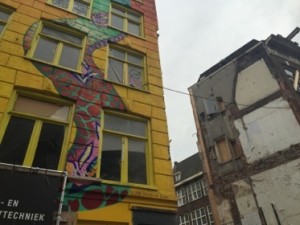 At the start of the gentrification process

Every luxury hotel in beautiful Amsterdam has bicycles because everyone cycles – even the old and infirm are, like babies, transported by bikes, though the former tend to sit behind the pedallist, in a rickshaw carriage, while the latter are transported in front of the operator, in a contraption that looks like a wheelbarrow. Tourists tend to cycle through the most desirable parts of town, for obvious reasons. I must say I would not want to venture along Spuistraat at night, except in a car. This day-time shot shows that the area is ripe for gentrification. Give it a few years, and W Amsterdam will be leading that uplifting process. By then not only the 166-room main hotel will be long-since finished but its extension, a 66-room conversion of a KAS Bank building across Spuistraat, should be up and running too. 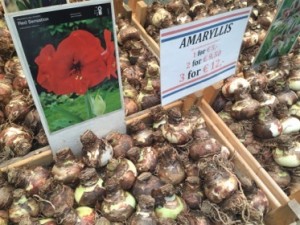 The ideal Christmas gift for gardeners

Amsterdam does have so many fabulous areas to visit. As always, I maximised my too-short visit. I did get to the just-opened revitalised Van Gogh Museum, with its amazing new oval-shaped glass and stone addendum, by Hans van Heeswijk Architects. I particularly adored the extremely well-curated Van Gogh meets Munch exhibition, for which they must have extensively raided the Edvard Munch Museum in Oslo (if you manage to get to this Amsterdam exhibition, save a bit of time for the excellent Museum store, with its great selection of Christmas presents). If I had space, too, I would have bought bulbs for gifts. Many think of Amsterdam’s Bloemenmarkt, on Singel between Koningsplein and Muntplein, as the place to buy tulips and other flowers, but right now it is a cornucopia of bulbs. I see them displayed and I think immediately of the gardeners at Waldorf Astoria Amsterdam, knowing they have to plant, by hand, over 8,000 bulbs for the hotel’s annual tulip display. 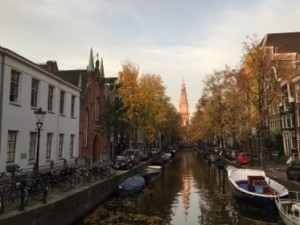 Yet another glorious sunset

Girlahead’s tip for anyone planning a trip to Amsterdam. Get ready for the mental agility of cycling round town. Take a bike from your luxury hotel, a black machine from Hotel de l’Europe, or a gentian-blue one – with drink holder attached – from Andaz Amsterdam. Do not even think of wearing a helmet (the only one I saw in three days was on the head of a tot in one of those wheelbarrow contraptions). Once on the move, do not deviate. If you are about to go through a red light, be careful but go straight ahead; buses, cars and pedestrians know to get out of your way. The only wobbles I saw were from a film crew, trying to shoot an actor being carried on the back of a typical sit-up-and-beg bike, and it swerved so much from side to side it really was dangerous. Also be aware that come sunset, many cyclists wobble deliberately to get a better view.