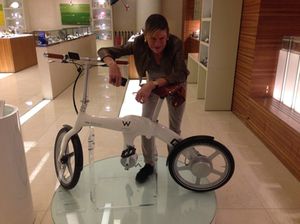 A bike made to stand out..

There are hotel bikes – and hotel bikes. In Paris, that ultimate luxury hotel Le Royal Monceau Raffles has one of the extraordinary Schieppati Ciclotte stationary bikes that some first saw at Costa Smeralda (it is designed by Antonio Citterio, says the gal, so you know how sleek it is). The boutique at W Seoul-Walkerhill also has bikes for sale in its boutique – but these are electric, and move like lightning up the many hills in Seoul.  Apparently most of the purchasers, however, are Chinese, possibly flush with cash after winning at the casino that shares this spot of land with this hotel, and with a neighbouring Sheraton. 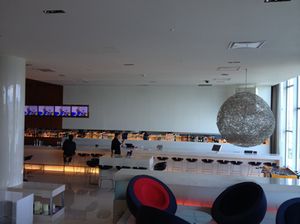 The city of Seoul covers 605 sq km – Greater London is 1,580 sq km and the five boroughs of New York City are 790 sq km – it can take some time, and some traffic jams, to get around at peak times.  In 1963 then-President Park Chung Hee, father of the present President, renamed Acha Hill, overlooking the Han River, after US Army Lt General Walton Harris Walker, a hero of the Korean War. Now Walkerhill is owned by the SK conglomerate, and as well as the Sheraton Walkerhill, and its casino, nine years ago they opened an adjacent W Hotel.  One of the hubs of activity here is the WOO Bar, which conveniently has tiered fixed-stone seating as if in a sports pavilion. Great, for instance, when DJs compete in the Bar area. 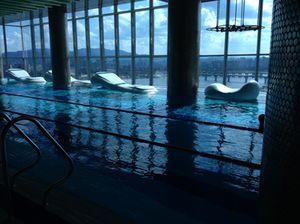 .. and the pool overlooks the Han river

Like every W, this 253-room hotel has a scrumptious pool, with views far down to the Han River below. Unlike far too many hotels, it also has a kids’ pool, which diverts at least some of the splashing. It has amazing rooms, many with views down to the river: Girlahead’s favourite is probably one of the end corner rooms, with windows on two walls (this layout has a normal bathtub, separated from the bedroom by a glass wall, but some others have red circular bathtubs in corner ‘protrusions’ of the main bathroom area).  And then there are Fantastic Suites, 98 sq m in all and beloved of girls for their girls’ nights out or hen parties.  Here you have salon, inner bedroom, and a really really big bathroom with spectacular views down to the river. In the centre of this bathroom is a two-metre stone-look Jacuzzi. Stay forever, splashing with the other girls. 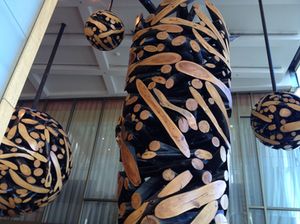 In the foyer of the hotel’s modern-Japanese restaurant a stack of two- metre branches is held upright, in steel grips.  There is more wood in the Tony Chi-designed Kitchen, the all-day restaurant, where sculptor Jaehyo Lee has excelled in show-the-end-of-wood-trunks sculpture (I first saw his work as outside tables at Park Hyatt Zurich).  Here is what I found out about him: 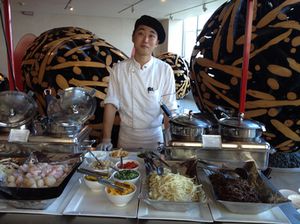 One of the many chefs at the (two-sitting) Sunday brunch …

Lee Jae-hyo, born in 1965 in Hapchen, Korea, graduated from Hong-ik University with a degree in Plastic Art. He assembles natural materials such as wood pieces, branches and leaves, or iron nails, into three-dimensional works. He has won, as you might guess, lots of awards. 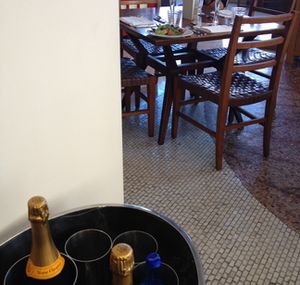 .. when you have a choice of unlimited Veuve Clicquot or Dom Pérignon

Here his pieces hang from the ceiling.  I was brunching with the GM, Greg Findlay, who landed on hotels after seven years as a flight attendant with Air New Zealand – he walked into the Sheraton Auckland and they offered him something straightaway. The brunch is amazing. As well as buffets and the noodle station beneath some of the Lee pieces, you can choose your meat, to be grilled, and the chefs personally come round with half-sized portions of proper dishes, whether ordered or not. It is so popular they have two sittings, at 11.30 and at 1.30. You can choose, at different price points, no-alcohol, or Veuve Clicquot by the magnum, or Dom Pérignon.  There are always events going on here.  This Saturday, October 26th, there is a Halloween party (W Blood Red Party), with DJ Pelussie. DJs meet up from time to time to swop techniques and network, as do bloggers and fashionistas – the hotel hosts a fashion show on November 28th.  This is a luxury hotel that is also into sport: Rafael Nadal and the Brawn F1 team are among recent guests, and well, when it comes to younger celeb, the very-latest label names seem to champing at the bit to get in.