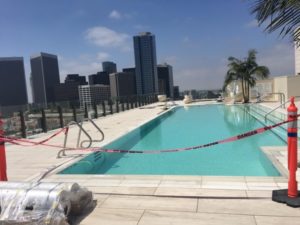 Wait for it, Thursday June 1st, 2017, is coming. WHY is that important, asks the gal? Well, in the luxury hotel world there are two highly significant openings. One is Cuba’s first elegant 21st century beauty, Gran Hotel Manzana Kempinski La Habana, which GirlAhead covered exclusively on April 25th, 2017. The other is the equally sensational Waldorf Astoria Beverly Hills, and here again, you get a first-look. Approaching the junction of Santa Monica and Wilshire, you see this gorgeous sculpture, as above. Wow, it is 12 floors high, in an area that generally imposes a maximum height of five floors. Evidently the owner, Beny Alagem, is a powerful local resident. He is also a visionary. It is he who has insisted on having a pool, open only to those staying in the 170-room hotel, on the rooftop. 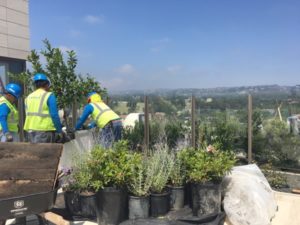 Working on the rooftop garden

Up there, too, is a big working garden, with magnificent displays of lavender and other fragrant plants, all the better to create aromas for those who will come up here to dine, at the outdoor restaurant run, like all the food in the hotel, by Jean-Georges Vongerichten (another element put in by the owner). Vongerichten is also doing room service, and the food in the enormous 120-seat, double-height ground floor Jean Georges Beverly Hills. Yes, in case you had wondered, although we are in Beverly Hills California, this will be a very Francocentric operation, throughout. The food organiser is Stéphane Lacroix, formerly at the Beverly Hills Hotel. Designer for the entire hotel is Pierre-Yves Rochon, again the choice of Beny Alagem, who is using as his benchmark not another Hilton hotel but Four Seasons George V, in Paris. 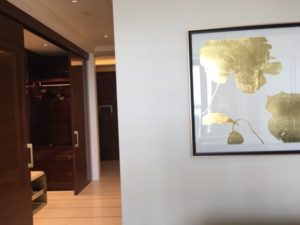 All rooms have stunning art

Unlike that Parisian vision, at this hotel all bedrooms have sizeable balconies, with seating, live plants and glass protection walls. The bedrooms, by the way, evoke thoughts of bias-cut crepe de chine nightdresses, Champagne hues, and round-edged heavy-lacquer furniture. I especially love the Beverly Hills Suites, in the apex of architect Gensler’s free-form triangular shape, that have fan-shaped salons, and really big, wrap-round balconies. But I also like the starter rooms, with their white Carrara marble floors, Sayer Posturepedic beds, and Samsung televisions whose screens are, diagonally, 55 inches. Basic rooms, incidentally, have Waldorf brand-standard Ferragamo toiletries, while suites have Diptyque, the favourite of Beny Alagem. 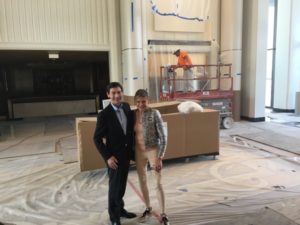 So this is the guy who has chosen the art and sculpture, and the books, in bedrooms. And could it be that he only bought the Beverly Hilton, back in 2003, because it had enough garden space to put up a Waldorf Astoria? That is certainly what some believe, and his forward-thinking has worked out. He has also got in place one of the best-possible current luxury managers, in hotels or any lifestyle sector, would-be soldier Luc Delafosse. His background includes Burj Al Arab in Dubai and Le Crillon in Paris. And yes, he is French. This is the forthcoming US luxury hotel that should definitely be watched.