I am thrilled that Dinner by Heston Blumenthal is Best New Restaurant in London, 2011 – according to Zagat and this girl, that is.   Published September 13th, 2011, Zagat’s survey supposedly reflects the thoughts of 5,497 voters, who sensibly also said The Wolseley continues to be London’s most popular restaurant.

Try and get a reservation at The Wolseley?  Forget it, unless you plan ahead or know someone like a great concierge. The same is also true, now, with  Dinner by Heston.  It opened January 31st, 2011 and you need to book three months ahead, but it sure is worth it.

What makes Dinner by Heston such a fabulous winner, too, is that it is in a HOTEL.  It is one of the two restaurants in Mandarin Oriental Hyde Park London – the other one is Bar Boulud, by another culinary pal, Daniel Boulud.

The main room looks out over Hyde Park

When this girl was lucky enough to dine at Dinner, my choice included Roast Marrowbone with Parsley, Anchovy and Mace, Pickled Vegetables.  This recipe was discovered by Heston and Ashley Palmer-Watts, his chef who actually cooks here, in John Nott’s The Cook’s and Confectioner’s Dictionary, published 1723.

Adam Tihany designed the 120-seat restaurant, which does have a private diningroom and a chef’s table but if you sit window-side in the main restaurant you may be lucky enough to see some of The Household Cavalry riding by – they have been based at nearby Knightsbridge Barracks since 1795. 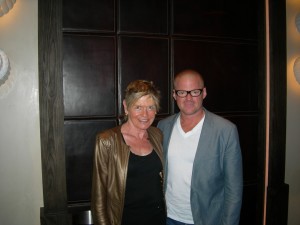 Heston Blumenthal remains so humble, despite all his awards

Mandarin Oriental is where the eternally-youthful Queen held her private party for all the European Royals the night before the Royal Wedding. Lots of non-Royals would, of course, love to have been invited…

When I first met Tim and Nina Zagat, the former New York lawyers who started the eponymous guide, it was at a dinner hosted by Craig Claiborne, one time Food Editor of the New York Times (David Bouley produced clear tomato broth and both Zagats were humbly charming). Things changed. And now they have finally managed to sell their company and its guides – to Google.