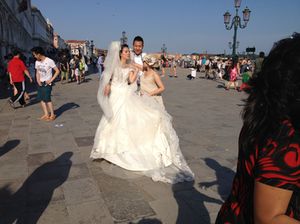 Where is the ideal place for a wedding these days?  Some like to stay as close as possible to home. Others, like the couple shown, travel halfway round the world, which results in souvenir photos that can be shown to family that could not make it, to friends and anyone else who is interested.  This couple in Piazza San Marco, Venice, seem absolutely unperturbed by crowds around them. Which luxury hotel are they staying in? For superb honeymoon memories, the gal would suggest a Palazzo suite at Hotel Cipriani, with views across to San Marco (or, for best Grand Canal views, a water-facing suite at the Aman Canal Grande or the Gritti Palace). For getting away from crowds, take the Presidential Suite of the Hilton Molino Stucky (private elevator, three floors, including a private gym). 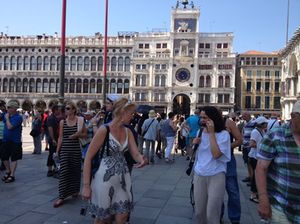 Oh the crowds. Venice, or the central part of it, bursts at the seams on a hot summer’s day. Every weekend, too, five or so mega cruise ships sail slowly in, almost lurching as 3,000 or more passengers rush to starboard to photograph San Marco as the ship passes, en route to the cruise terminal. These passengers then disembark to do the usual tourist things. Luxury travel tip to the single, or independent, traveller in this beautiful city. Get up early, get out early, wander away, Far From The Madding Crowd. 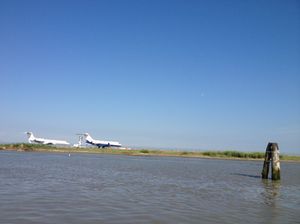 The airport is right next to the water

As the lovely Olivia Richli, who arrived a year ago to open up the amazing ‘new’ Aman Canal Grande, says, you simply cannot get lost in Venice. Even the tiniest walkway is named (there are over 5,000 nizoletti street signs, black stencils  Bodoni letters on whitewash).  Just walk, and then go home, to your hotel, for a foot massage and, from June to August (when peaches are perfect) a Bellini.  It is magic here, from the moment you arrive.  Fly in, and you feel the plane is going to have to float on water. The water-taxi terminal in only seven minutes’ walk from the terminal and as you speed away, you can almost touch the runway. 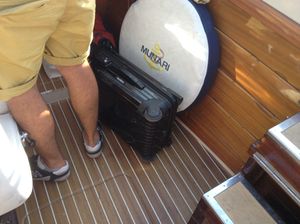 A water taxi delivers the Porsche Rimowa in suitable style

You will save money, by the way, if you do not let your travel agent pre-book a water taxi with any outfit other than the official motor-taxi service.  TripAdvisor comments show that ad hoc pre-booking can result in your being bumped to a car taxi, and even if not you may end up paying about 150 percent of what you pay on the spot.  The official site offers an airport to city hotel, return, for €100, maximum five people and 12 suitcases, with surcharges for extra passengers and night service – actually this does not seem bad as it is a riveting 15-minute journey. 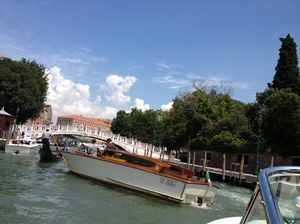 Traffic on the canals can also become crowded

When you get going, ‘speed’ is the wrong word. The water taxis keep to strict paths on the airport to city route, and are limited in places to a mere walking pace. Many travellers to Venice become so addicted to travelling on water that they want to take a gondola (minimum 40 minutes, €80, maximum six people). Much better value is travelling on the scheduled ACTV water buses.  Here, single tickets are seven euros but you can hop on and off for 60 minutes: really good value is the 72-hour travel card (€35) or, for a week’s stay, buy the €50 card: pay another four euros to add land-buses, which gives transport to-from the airport or the rail station. 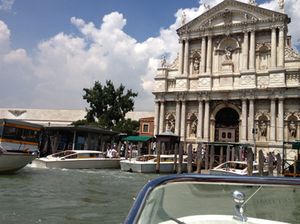 Arriving at the rail station (left of photo)

I had a private water taxi direct from my luxury hotel to Venice rail station. What a memorable arrival it had been, flying in.  What an equally memorable farewell it was. The landing stage is literally three minutes’ walk from the station steps. A final tip: take your own sandwich and drinks as the one food place I found on the absolutely crowded concourse had long lines, and it is pay-first and then queue again to pick up whatever.