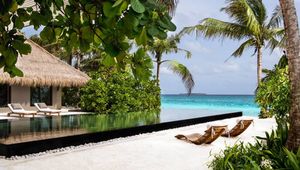 Le Cheval Blanc in the Maldives

To anyone in the snowy cold of northern Europe, escaping to the Maldives right now sounds just the ticket (and it is becoming easier to get there, with Emirates flying B-777s and possibly upping to A-380s, taking cargo in and flying back cargo-free, to be able to take off).  Every luxury hotel on the islands should benefit. Newest of the bunch is Le Cheval Blanc Randheli, which opened November 15th, 2013, on Randheli Island, Noonu Atoll, 40 minutes by seaplane north of Male. The gal heard about it at the LVMH party at Cannes ILTM. 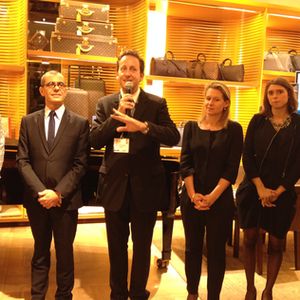 One big advantage for some hotel brands is being owned by a fashion great, say Lungarno by Ferragamo and, in this case, Le Cheval Blanc and the mighty LVMH conglomerate.  This meant that Le Cheval Blanc could hold its ILTM cocktail at the Louis Vuitton store on Le Croisette. Eric Boonstoppel, Head of Operations, LVMH Hotel Management, explained the two hotels in the group, and shared details of the Maldives.

All the villas have 22-feet high doors (designer is Jean-Michel Gathy, who ever since he made his name with various Amanresort hotels and with One&Only Reethi Rah has evoked mouth-open reaction). 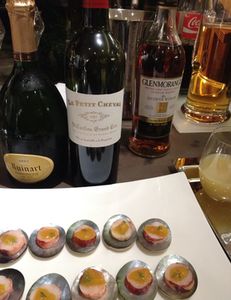 There is a six-room Guerlain spa, and hair by Leonor Greyl. You have yoga and tennis and four restaurants, offering classic fine dining at Le 1947 (which is the Cheval Blanc standard haute cuisine), and brasserie at White (Cheval Blanc’s all-day dining concept), and Japanese-Iberian at Diptych and seafood at Deelani, and if you want to dine in your room a chef can come and cook for you, in the room.

As Eric Boonstoppel was explaining all this, we were eatin’ and drinkin’ of course. The drinks all came from the LVMH stable, which of course is enormous, with bubbles including Moët & Chandon and Dom Pérignon.

Tonight, stylishly, the Champagne was Ruinart, and the red wine was a perfectly delicious Le Petit Cheval 2007.  All around were latest frocks by Louis Vuitton’s designer Marc Jacobs, but miraculously none of the bubbles or red droplets seemed to fall on the fashion. 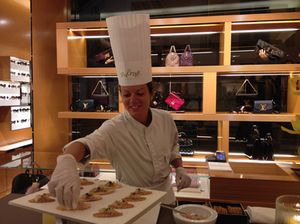 There were people at the party from LVMH’s Caribbean destination, Hotel St-Barth Isle de France, which was purchased this August, thus casting aside the Oetker Collection, which had been managing the hotel for the last year (long before that this 39-room hotel, which dates back to 1993, had been owned by a multi-tasking Englishman, The Rev Charles Vere Nicholl.  For now, says Eric Boonstroppel, it will run as-is, but later it will be given the Le Cheval Blanc treatment, which includes Dior-designed toiletries that are separate for men and for women.  I ask if Le Cheval Blanc rooms, wherever, include serious books?  LVMH now owns 30 percent of Assouline. The conversation evolves before there is time to answer. 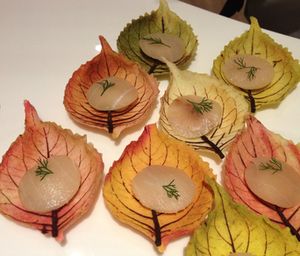 Real-look leaves made of sugar

The catering tonight was by Lenôtre, which is now part of Sodexho catering. I am fascinated by the cocktail parties at all shows, but especially at this, the biggest of the luxury events. All the 1,450 top luxury travel buyers (travel advisors, also still known as travel agents) are courted non-stop, by exhibiting countries and hotels. To my mind, the party-givers that get the best guests are those that not only choose an exciting location but one that is easily accessible – something close to the exhibition centre wins hands down over being bussed to a chateau, and having to wait for a bus back.  And the quality of the drink gets good points, while food must be tasty, and easy-to-eat with the fingers. 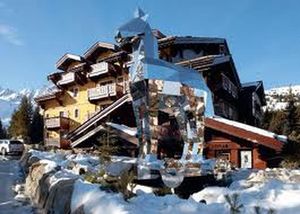 Certainly Le Cheval Blanc has all the LVMH resources at its fingertips. And, as Eric Boonstoppel says, most of the guests can frankly afford anything and the philosophy is to offer hospitality through emotion.  Take the most senior of the portfolio properties, Le Cheval Blanc, Courchevel, which has 142 people to look after a mere 34 rooms.  One of France’s top-ranked ‘palaces’, it is ideal for families as five rooms can be linked together. The most coveted room key, though, is that to The Apartment, a penthouse with four bedrooms and its own private elevator.  Go quickly – it is only open mid-December through early April, during which short time it runs at over 80 percent occupancy.