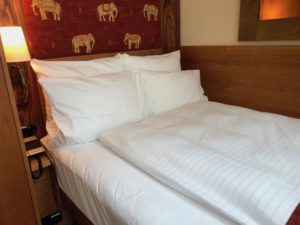 Smallest room in the house

Oriana.Berlin.Hotel.Restaurant.Bar.Concerts – generally just called The Orania – is at Oranienplatz in the Kreuzberg area of Berlin. As a luxury hotel, it opened only August 2017 and it must have got a lot of things right – one guest has just checked in for a 22nd visit. On the restaurant side, the gal was sadly not able to dine there but the venue looked most enticing and apparently all 65 seats are filled every night for dinner. The bar looks super, and a sheet of paper lists concerts every night, with additional jazz specials on Tuesdays and Thursdays. 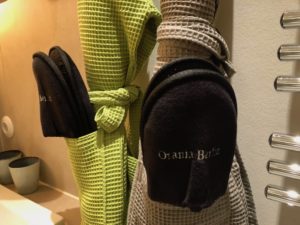 The building goes back to the year 1914 when it was built as a café with three letting bedrooms. Fast forward over a hundred years, through periods of hosting C&A and other retail companies, and it was bought by Dieter Mueller-Elmau, an extreme renaissance man whose many talents include founding hotel software platforms Fidelio and Opera – he also owns his family-heritage castle Schloss Elmau. Here in Berlin he wanted to save the building and bring it back to life. He designed the interiors of what is now a 41-room Small Luxury Hotels of the World treasure (SLH is really helpful in making it all work, says Hotel Manager Jennifer Vogel who, with her husband Philipp Vogel, GM and Executive Chef here, previously worked at Hotel Adlon Kempinski, also in Berlin). 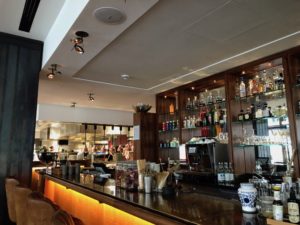 There are so many features. The ground floor wraps around in a big-C formation, from the hotel’s entrance on Oranienplatz, immediately past a 360-degree real log fire (with a stack of Berlin-local logs in a stylish black trolley), past bar and casual dining area to the main restaurant, and open kitchen. Here, you might choose winter beets with goat cheese and green wheat, or a Veggie Delight sharing menu, or oven-baked chocolate cake with vanilla sauce. Up in the rooms, even the smallest room, at 190 sq ft, is charming because it looks out at what is basically the five-floor wall of an inner courtyard but in fact gives a vista of beaches, or sunsets, or old movies, projected as needed. 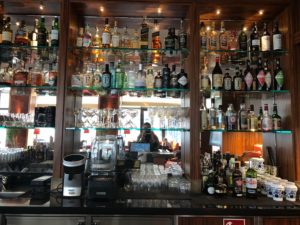 The whole ground floor is light-and-bright

And finally up to the top floor, which is one big salon, the size of two tennis courts. Here is a splendid Steinway, tuned to such perfection that it is often used by mega stars practising before concerts with the Berlin Philharmonic. There are hundreds of polysyllabic books around. Special events are hosted here but every night there are free concerts with, in addition, pay-for jazz twice a week. This week, on March 15th, for instance. at 7 p.m. there was an hour-long jazz special, tickets €12, starring saxophonist Felix Wahnschaffe, and pianist Wolfgang Köhler. This was immediately followed, 8 p.m. to 10 p.m. by a free piano recital from Benedikt Jahnel. A week earlier, the salon hosted a unique ITB party, Luxury Late Night. NOW SEE A VIDEO TOUR OF THE LOBBY