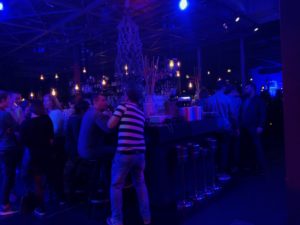 Ah, differentiation in luxury hotels.  There is lots of differentiation to be found at 25hours Bikini Hotel Berlin. This is an extraordinary luxury hotel, managed by a unique GM, Dirk Dreyer, a one-time professional DJ who then spent years in music. Although he is now a full-time hotel person, he retains his music. As well as running this hotel, Dreyer also looks after music for the entire 25hours group. As always, there was a line in the ground-floor lobby, waiting to be allowed into the dedicated elevator that takes you up to the rooftop, to Monkey Bar, one of Europe’s best bars, a haven for all ages: the enthusiastic mixologists and servers look after over a thousand covers a night, no reservations but their colleagues down at ground-floor level sensibly stagger those allowed up. 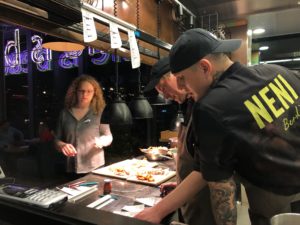 The kitchen works at lightning speed

The adjacent NENI, by contrast, is absolutely reservation-only and if you do not have a table you will not get in – this is a 149-room hotel that regularly does over 450 covers, total lunch and dinner, in its restaurant.  At lunch you look down, right into Berlin Zoo.  At dinner you tend to look in, at the other diners, many locals who know this is a jolly good place to eat, at extremely reasonable prices. I That night, I was dining with Dirk Dreyer. Like many of the tables around us, we shared a mezze starter (see above), choose your own three plates, which come on one of those curate’s stands normally associated with afternoon teas.  We had a babaghannouj, a plain hommus and a beetroot hommus and, having lived in the Middle East, I must say this was entirely authentic and so so flavourful. 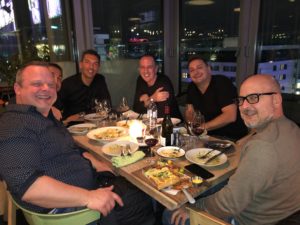 NENI, in case you wonder, is named for the four sons of chef Haya Molcho, an Israeli chef who lives with her mime-artist husband Samy in Vienna: their sons are Nuriel, Elior, Nadiv and Ilan (take the first letters of their names and you get – NENI).  There are already several NENIs in 25hours hotels, including the just-opened lively hotel a few metres from the front entrance to Gare du Nord, Paris, and there will be another NENI in the Dubai hotel, opening shortly.  The NENI concept is, honestly, such a favourite, for all ages – Dirk and I coincided with a lot of Accor foodies that night and they, too, raved afterwards about the food, and the service (Accor bought 30% of the 25hours brand in 2017).  The whole evening was indeed memorable. 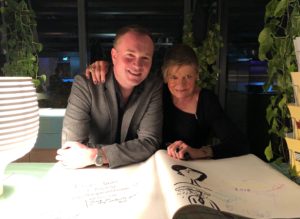 I had time to find out about Dirk Dreyer. This unusual GM had realised back in 2009, when he was Berlin-based Senior Product Manager for 313 Music, that it was time for a change. He wanted to stay in Berlin.  He had conversations with leaders of many industries, and after a couple of glasses of wine with the GM of Lux 11 hotel he found himself accepting an offer to run its second property (172 rooms and all F&B leased out).  He knew nothing about running hotels but he had stayed in them, around the world, sometimes three nights every week.  As he recalls, now, he read some books, talked with people, and started. The first morning, he does admit, he was somewhat nervous, but after two years working for the Lux 11 people he was headhunted by the franchise holder to launch Indigos in Berlin: he next moved on to the NH Group and then finally he got the call he had been waiting for. He had long wanted to work for Christoph Hoffman, who telephoned to invite him to run 25hours Hotel Bikini Berlin (he started April 2017). Well, Dirk Dreyer says, 25hours Hotel Bikini Berlin is a luxury hotel with food and music, and fashion and fun, and being in charge of this is not unlike running a night club.