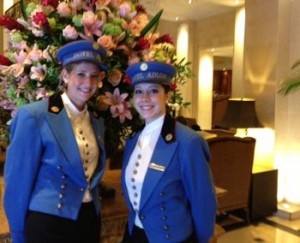 Ladies in blue, in the lobby

Go into Whole Foods and you know you will be aware of clean air, the brightest and most perfect fresh fruit and the best products you can buy. Go into most lower-tier supermarkets and you are welcomed with baking-bread aromas that you suspect are false. Go into Neiman-Marcus or Nordstrom, or even Harrods, and the first impression is expensive perfume. So it is with luxury hotels. Go into any Kempinski and you are greeted by ladies in red, one of the signatures of this value-luxury brand. There is, however, one exception. At the brilliant Hotel Adlon Kempinski, Berlin, you might also find female bellhops in blue. Why blue, asks the gal? They are so dressed as reminders of the amazingly successful recent ZDF television series, The Adlon: A Family Saga. Every day hundreds come, apparently, to view the hotel’s lobby – meeting point of Berlin’s gentry – and see its fountain, which featured in the three-part series. 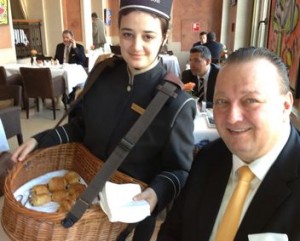 Oliver Eller, GM of this classic 383-room hotel, has introduced several elements of nostalgia. Although the hotel as it is now only opened in 1998, there has been a building here since 1907, when it was designed by architects Carl Gause and Robert Leibinitz for Lorenz Adlon. Since then it has been razed, rebuilt, razed, rebuilt… Today, outside the seven-floor building, you may see an old-fashioned delivery bicycle, with a wicker basket in front. At breakfast, a bellhop, in grey this time, might come round offering just-made croissants, to supplement those healthy breads that the Germans do so well (and thank goodness German hotels offer buffets, knowing that their guests want what THEY want, and quickly). 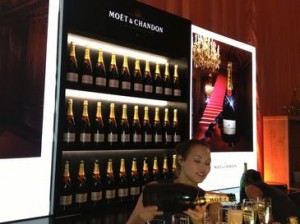 One of the Moët stations at the party of the year

The Adlon is renowned for meetings and events of all sorts. Every year, during the annual ITB travel bonanza – the biggest gathering of people going hither and thither and back and forth – Kempinki, together with partners the Global Hotel Alliance, throw a humdinger of a party. This year, as always, the event lived up to expectations. The thousand people lucky enough to be invited were literally checked in, with wrist bangles that you could only cut off. The entertainment this year was by Ivan McCormick of the 29 Fingers group, and the stage gyrated with 60s-style rock. Fortunately there were beer stations, and wine stations, and two very-active Champagne points pouring, it seemed endlessly, from magnums of Moët & Chandon. 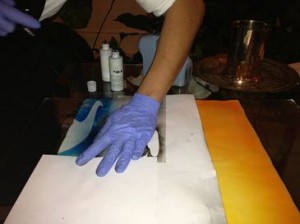 A chocolatier was producing chocolate art

Of course there had to be food too, and little plates were being passed round (jolly difficult to hold a plate, and a fork, and a glass, and talk, too..). In the dessert room, a patissier was forming edible pictures, using a blow-torch and different coloured chocolates. The party went on and on but, as is always the case with the best establishments, by early morning there was not a sign that anything had taken place. Cinderella came to that ball but, next day, not only Cinderella but the party had disappeared without trace. 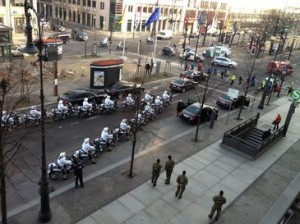 Police outriders await the departure of a State VIP

Anna Wintour, the power at Vogue USA, believes in only staying 20 minutes anywhere, even at her own parties. Following her, I must admit I did Wintour-style cameos at two concurrent events that night, an elegant Carlson Rezidor dinner atop the Radisson Blu Berlin (the one with a 40-foot fish tank in the lobby), and an in-kitchen gourmet session at Steigenberger Berlin. Three parties, one night. In the morning I was woken by noise outside room 218 – yes, it has double-glazing but, as at all good German hotels, the windows blissfully open. Outside a cavalcade was assembling. Question, how many police outriders are required to say goodbye to a state-visit VIP? Answer, in this case, 18. 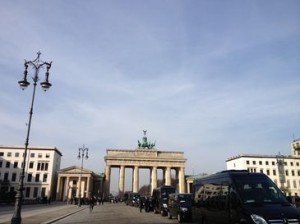 Look left, from room 218, to the Brandenburg Gate

Although the -12 series corner rooms have even better views of Berlin’s Brandenburg Gate, with its Quadriga atop (Victoria driving her four-horse chariot), I love the -18 rooms. One looks down not only at departures like the cavalcade shown, and whatever is happening in Pariser Platz, but also, turning left, there is the Gate, and all day long there will be tourists visiting, and locals dressed in historic clothes waiting to be photographed. The Adlon is one of those luxury hotels that is ongoing theatre, with the nicest-possible actors running what becomes my home in Berlin.