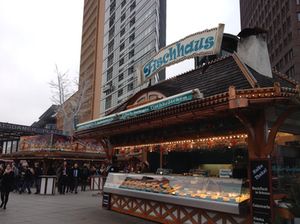 Christmas markets, Christkindlmarkt, Christkindlesmarkt, Christkindlmarket, and Weihnachtsmarkt, are a tradition of central Europe (the first market is known to have been held in Dresden way back in 1434). Today some luxury hotels make good use of this custom. The Steigenberger Frankfurterhof in Frankfurt, for instance, holds a Christmas market right in its own courtyard.  In Berlin, there is a Christmas market, complete with short ski slope (and snow!) already in place at Potsdamer Platz, handy for both the Marriott and Ritz-Carlton. Already, even in November, people were sampling various types of beer and sausages and other festive fare, or rather anything that you can eat and drink whenever, whatever, says the gal. 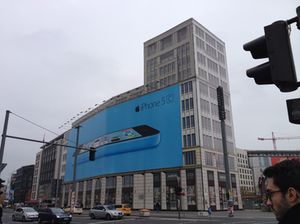 Berlin is a combination of old and new. There are the traditions of centuries and fresh things too.  Apple is big, as everywhere, and city governance of advertising does not seem to mind blatant exposure of one product rather than another. Look out of the Swissôtel windows and you see not only an Apple Store but also a massive Beate Uhse Erotik Museum, in other words a sex shop, one of many started by a woman of that name, a former stunt pilot and entrepreneur (she opened the world’s first sex shop in 1962, though this one dates back only to 1996). 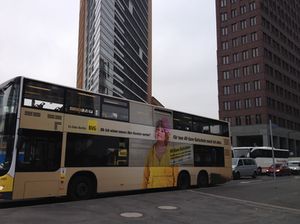 I do think that pretty buses are a good idea but why put such an ugly woman, as here? There are plenty of good-looking Berliners, even though their fashion today is dark and sombre.  I would suggest putting up candidates for Miss Germany, but perhaps that would cause more traffic accidents. I love Berlin’s public transport. You can get anywhere, it seems, and the airport bus service is remarkably efficient.  Another thing that is noticeable is that traffic snarls in the city centre seem more or less non-existent. 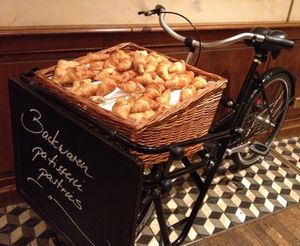 Welcome to the Ritz-Carlton’s breakfast…

I mentioned Ritz-Carlton Berlin.  This was the headquarters hotel for the meeting of Relais & Châteaux, and it cleverly closed its tenth floor Club Lounge during the convention.  Breakfast was in the main brasserie, formed by designer Peter Silling from a real brasserie, 1875 vintage, he had found in Beaune. You are greeted at the breakfast door by a delivery bicycle, and lots of croissants and a great perfume of viennoiserie. And the coffee here is some of the world’s best. (It is Alegretto from San Marco.) 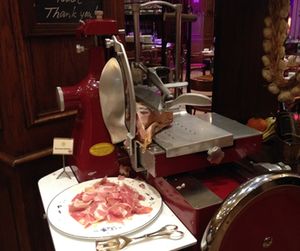 .. and some cold cuts

One nice touch is that the standing slicer here is used as a serving station, and customers help themselves to slices of charcuterie.  I saw this only a few days ago at the Schweizerhof in Berne.  Perhaps it will start a new trend, I hope so. The array of cold meats, and various marinated and smoked fish that I see as I travel around is certainly growing. There is fortunately no sign of an influx of breakfast bars or composite foods, at least at luxury level buffets. 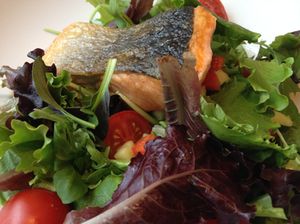 Self composition at the Adlon Kempinski

What is certainly noticeable in luxury hotels is the ability of servers to accommodate personalisation of meals. At the Adlon Kempinski, I ordered salmon from one dish on the menu, and a salad from another, and, hey presto, the result was really good. Yes, it has been good to be back in Berlin.