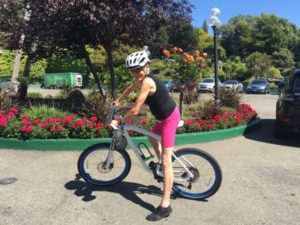 Off, with a hotel BMW, to explore the locale

What is now Claremont Club & Spa, A Fairmont Hotel, Berkeley, is one of California’s most stately luxury hotels, says the gal. It was built as a palace, for Mrs Bill Thornburg from Kansas, who persuaded her made-money hubby to buy 13,000 hillside acres to build her an English castle, with extensive stables (they imported Cockney grooms from London and raised English foxes). She died, Mr Thornburg sold it on. In 1901 it burned and the charred remains were won by Frank Havens at the checkers table. He built a hotel here, which finally opened in 1915. Today the sprawling hotel, a testament to the publicity effect of white paint – see above – offers 276 rooms, each unique. 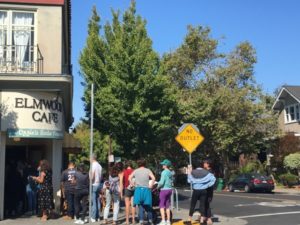 Facilities include an enormous club with three pools, ten tennis courts and 1,600 local members. There are also white BMW bikes, first-come first-served, and I had a couple of outstanding rides. Concierge Anne sent me off with helmet, water, and several maps. I went north down Russell and east along College to the Hearst Museum of Anthropology and the main campus of University of California at Berkeley, generally known as UC Berkeley – gosh the campus, the buildings and the well-kept grounds. I cycled through Berkeley downtown, and to Oakland, where typically local residents seem to waste far too much of Sunday mid-mornings standing in line for exorbitantly-priced paper cups of coffee. 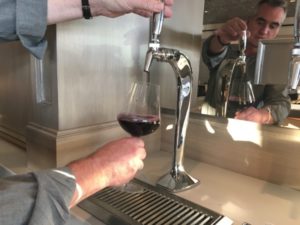 Back up at my temporary home, there was so much to see. The hotel is owned by Fairmont, in partnership with Dianne Feinstein’s husband Richard Blum. Because he is such a keen mountaineer the main bar, leading off the lobby, is the antebellum-blue Hillary Tenzing, named for the first two climbers to reach the summit of Everest, and it has fascinating memorabilia that Richard Blum has brought back from his own travels to Nepal. The bar is Gensler designed, as is Limewood, a fine-dining restaurant that opens for dinner from August 30th, 2016 (lunch will be added September 6th, 2016). Limewood Manager Benjamin Laurenchandler, from Paris, showed off his Perlick’s tap system, that allows Keenan wines, from Napa, to be drawn on demand – try the 2013 Chardonnay, or the 2012 Syrah (other taps produce a range of beers, and a superb Nitro Cold Brew iced coffee from Red Bay Coffee). 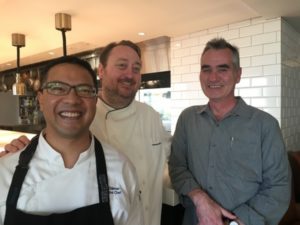 The GM of this luxury hotel, Len Czarnecki – who is also a cyclist – has assembled a really characterful culinary team here. His main chef, Arwi Odenso, has worked with Fairmont for some years, but Joseph Humphrey, in charge of the open kitchen at Limewood, is more a local specialist. The hotel already believes in the farm-to-table concept: my Hartley Ranch USDA Prime ribeye came with Bloomdale spinach (and went jolly well with that Keenan Syrah, though in retrospect it would have been more adventurous to have tried a local craft beer, say Speakeasy Prohibition Ale). After that, I eschewed the elevators to trek 86 steps up to my lovely space, 601, its living room occupying the whole of one floor of the hotel’s main tower. SEE THE VIDEO BELOW TO HAVE A TOUR OF THE SUITE.