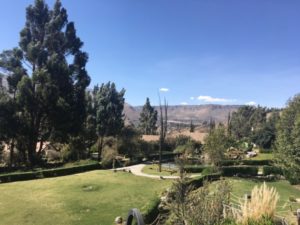 Looking across the grounds

Belmond is one luxury hotel company that believes in diversification, says the gal. It already has river boats in south-east Asia and trains in three continents. For its fabulous Belmond Andean Explorer train it can of course offer a choice of lodging at the Cusco end and, from May 4th, 2017, also accommodate you at the Arequipa end, at Belmond Las Casitas Colcha Canyon. The gal certainly recommends getting off at the train’s penultimate stop, at an isolated halt, where Belmond has a Mercedes mini-bus waiting. Yes, it is a two-hour journey but the route is spectacular, over lonely passes, alpacas here, a glacier there, look everywhere at volcanoes, including Sabancaya erupting in the distance. The road is first-class until the final three miles, and then you wend down a zigzag drive, the 50 acres of the estate spread in front of you. You can see the tower (as above) of the resort’s Capilla, a working church that is ideal for romantic weddings. 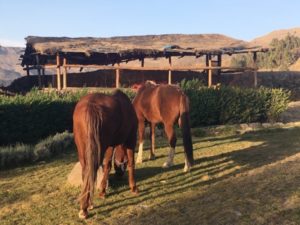 You soon want to tour the estate, to visit the church and the trout ponds where kids can fish, for free (pay the going rate for any catch you subsequently ask the kitchen to cook for dinner). Five tables are set up in the organic produce gardens for outside barbecues: there are alpacas to admire, and horses to ride. This is part Outback and part Modern Luxury. Orient-Express’s James Sherwood bought what had been a single lodge back in 2008 and built 20 detached casitas, a Presidential at a total of 2,200 sq ft, including private garden and swimming pool, the others all 1,200 sq ft, including garden and heated plunge pool. Well, four years later Orient-Express sold the whole operation to a Colombian concern, GHL, which asked Sonesta to manage, but now, with its new train, Belmond, as it now is, thought it time to buy the resort back. So that is what happened, and, under live-wire Manager Aldo Del Campo, it is being Belmondised fast. 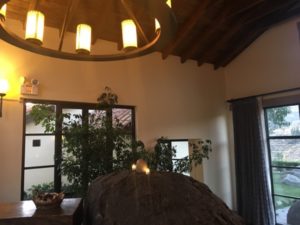 Casita 28, with a typical interior size of 800 sq ft, has light mustard walls soaring from tiled floors to open-gable wood ceilings: I had excellent WiFi – not available on the train – and a real log fire, and the big bathroom, with indoor and outdoor showers, has a tile floor that deliciously heats up at night. My time was short (so what is new?) but the spa was a big draw, and therapist Mary’s Itiy deep-tissue massage, using arnica and eucalyptus, was first class, eliminating the knots and so on of past days. I dined with Aldo Del Campo, and raved about the salads, using produce from the gardens here combined with such local protein as trout, no surprise, and crackling-heavy pork from Arequipa. The warm breads, which come in a collano, a hollow flower pot shaped like a curling stone, with a handle, are irresistible, especially the pesto rolls. 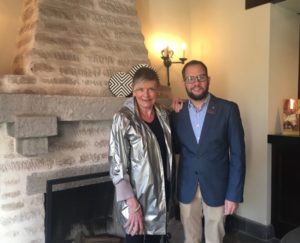 In the morning most will head off to the see the condors for which Colcha Canyon is best known, but the ambience generally is rather akin to the Grand Canyon. I had to fly back to Lima and leave Peru, sob sob, so it was another early start. Luxury hotels can manage efficiency even in the most rural of settings and exactly at the requested time my room service breakfast arrived, with outstanding coffee and drinking yoghurt and more of those breads, carried shoulder high the 200 yards from the main lodge. Aldo Del Campo, who is so versatile he can do anything, it seems, had somehow managed to access my LATAM boarding card, which I had been unable to do. He handed it to me with a big smile and I settled down for the three-hour transfer to Arequipa airport (be prepared, as Belmond Las Casitas says honestly, for a ride that can best be described as an “experience”, which in my case included stopping for at least 200 alpaca to wander across the lonely road at snails’ pace). SEE WHAT A CASITA LOOKS LIKE, BELOW