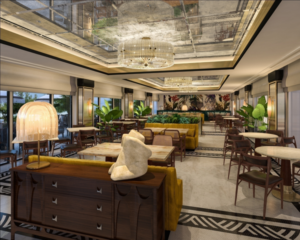 The luxury Belmond Copacabana Palace hotel, right on Rio de Janeiro’s Copacabana Beach, has continued to set trends since it was built in 1923. Take its food and drink offerings. There is the Cipriani restaurant, where few would pass over its green tagliarini au gratin followed by tiramisu.  In 2014, it opened the dinner-only MEE restaurant, a Michelin-starred partnership with Ken Hom.  This October, 2017, it re-opens its all-day Pergola, re-imagined by the oh-so-talented Inge Moore who did the glorious, best-in-class Belmond Andean Explorer train (take its three-day luxury trip from Cusco to Arequipa, with a whole day on Lake Titicaca enroute).  To enhance Pergola even further, savvy GM of Belmond Copacabana Palace Andrea Natal called for advice from Gorgeous Group, led by Robbie Bargh.  As before, Pergola has a pool-facing terrace, above, and an air-conditioned indoor area.  Here, no-one would miss the buffets, with the best-in-world fruit selections that include mango chunks that are honestly worth the trip.