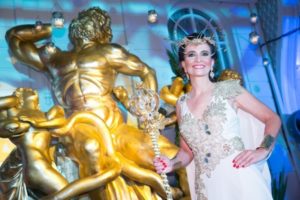 Andréa Natal at the 2016 Carnival Ball

As always, THE 24th annual event in Rio de Janeiro – if not in the whole of Brazil – is the Carnival Ball, Baile do Copa, at Belmond Copacabana Palace. This year’s gala, on Saturday February 25th, 2017, is themed for the geishas of Japan (Brazil is the largest Japanese community outside Japan). Designer of the event is the justly-famous Mario Borriello. Enter  under a torii gate, symbolising the passing from the real world to the spiritual, before winding your way through an entrance hall of blossoming cherry trees to a Japanese garden and tea house on the hotel balcony. Hotel chef David Mansaud will be offering sashimi and sushi alongside antipasti, salads, fillet mignon with oriental sauce and toasted peanuts plus an array of desserts. Expect, throughout, 500 Japanese lanterns hanging overhead such guests as Japanese muse Sabrina Sato, born in Japan. All the party-going guests will be in a variety of kimono or black-tie attire, and as always one of the most sensational looks will be presented by the hotel’s star boss, Andréa Natal.  Natal-san and Sato-san will together select the Queen of the Ball.