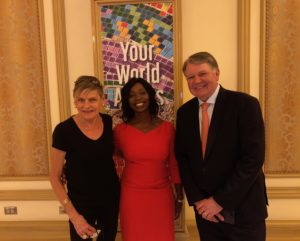 Jason Friedman, who oversees boutique-sized hotels in south-east Asia (where guests expect, and get, some of the world’s best service), sat next to Olivia Brown at the Virtuoso Travel Week’s 2,000-strong Hotels and Resorts dinner last week.  Olivia Brown is GM of the host hotel, Bellagio Resort & Casino, 3,933 bedrooms and a total of over-8,000 staff. Whew, said Jason in between courses, how DOES she make this such a luxury hotel?  Well, says the gal, Olivia Brown is unique, brought up in Toronto, honed at Ritz-Carlton, and lucky enough to be working here in Vegas with the President and COO, Randy Morton, another Toronto native but with a Four Seasons background. 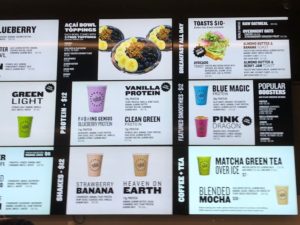 Training training training is the key.  At two of those massive dinners last week I was at a table served by Solange, memorable for her bright scarlet eyeglass frames. She quickly knew what everyone of her charges liked when it came to water, wine or whatever (as a military operation, servers were overseen by supervisors in turn controlled by an orchestra conductor who seemed to whirl around the ballroom, in touch with everyone via radio control, and using his eyes).  Add to these superlatives about the staff is the fact Olivia Brown looks after them – they get a 20% discount at her latest food venture, a stunning tiny grab-n-go outlet, Juice Press (this company founded by former Thai boxer Marcus Antebi in 2010 and, based in New York, it now has over 70 locations around the USA). 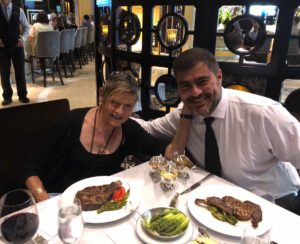 This time I stayed on the top floor of the 26-floor Spa Tower – the corridors are shorter than in the original tower, a tremendous asset when every second is at a premium during conference time (I could also get to the gym without going through the casino, another terrific plus).  Thank you, Olivia Brown and your team, for opening an hour earlier, at five o’clock, during Virtuoso.  As a commendable sign of the times, it is worth noting that the first morning of Virtuoso there must have been 50 people working out by 5.30 a.m, though by the fourth morning there were only five others… BECAUSE we all had busy evening engagements.  One of my favourite events was dinner at PRIME, to experience just the best in service, great food cooked beautifully, and a view looking out over Bellagio Lake. 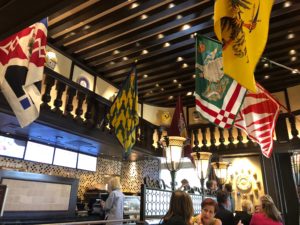 The main away-from-convention centre meeting place during Virtuoso is Palio, sit in or take your jacket off and sit out.  This is where you exchange more than Virtuoso’s classic wave of the hand to signify you recognise the other person and you do want to talk but not now and you know that with over 6,000 around it will probably not be this week.  At Palio you can generally exchange a couple of sentences, unless you have a planned get-together.  Palio closes early evening and then HARVEST becomes the networking centre – the Gleneagles team cleverly booked a corner table at the open-sided restaurant, right on the main internal walkway.  Yes, everything at Bellagio, and Virtuoso, falls into a pattern and the more you are part of it the more at home you feel, and you look forward to the luxury hotel’s next surprise. NOW SEE A VIDEO OF SPA TOWER ROOM 26-641