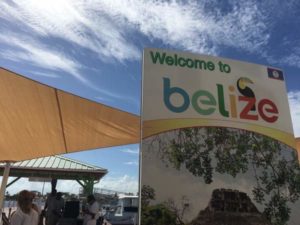 Cruising is a great way to explore the world – especially in Central America where it can be a case of one country every day. The gal started one day off Belize, celebrating in style as breakfast on Seven Seas Mariner that day had an extra display table, with caviars and Champagne. Then it was tenders ashore, to Belize City, for a drive around town, but sadly the signature Chateau Caribbean luxury hotel there had burned down November 27th, 2016 (see above). It had been built, of Canadian cedar, in 1927, and was Holden Memorial Hospital until converted to a hotel in 1977 – and it was featured in the 1980 film Dogs of War. Wooden buildings in Belize cannot get insurance, said the tour guide, so the owner lost the entire investment. 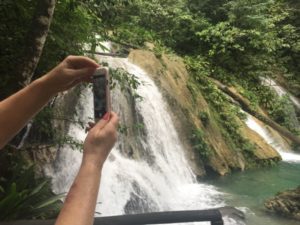 The next day was Santo Tomas de Castilla, Guatemala’s main Caribbean port, and the ship moored right next to a yard with literally thousands of containers waiting to be loaded. This is a country of over 15 million with an export business largely agriculture based, be it bananas, apples, avocados – Guatemalans claim the heritage of the Hass avocado but it seems that a Californian postman called Rudolph Hass, a bit of an amateur gardener in his spare time, was given a seed from Guatemala and it was he who first grew, and cultivated, the Haas avocado. While I was briefly studying fruit husbandry, others from the ship had gone to visit Mayan sites (an outstanding map from the tourist board shows that Mayan civilizations here go back to 1,000BC, with the Nakbé the oldest of all). 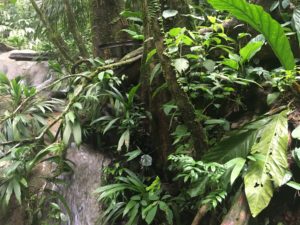 This is a country, too, of mountains and volcanoes, of which three, Fuego, Pascaya and Santa Maria, are still active. As always, the good ship Seven Seas Mariner has exciting tours and excursions, nearly all included in the cruise package, and I took a tour that offered a hike to Las Escobas Natural Reserve, memorable for a 90-minute walk through rainforest with waterfalls. Some of the others wore swimsuits under their hiking gear, and swam or paddled in the pools below the waterfalls, which are fortunately particularly deep in November and December, during the rainy seasons. We clambered back into the appropriate 22-seater bus, and bumped our way to a small hamlet-in-the-forest where a lady of indeterminate age was making tortillas. 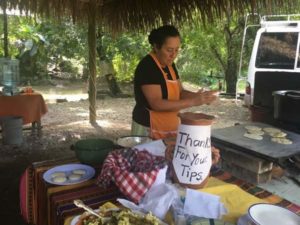 Try some, our guide urged. Others spread tortillas lavishly with guacamole, and-or with black bean paste, and drank the water from whole coconuts, and then we bumped our way back down, past the Santo Tomas naval base and through the sea of shipping containers. As I walked back on board it was just like returning to so many luxury hotels, welcome back home, said a Filipina security officer, after which I sanitized my hands and went straight back up to the 11th deck to sit out on the Verandah’s terrace, to watch a container ship being loaded in lightning time while I was brought pasta just as I wanted it, and a red apple already cut, as they know I like.