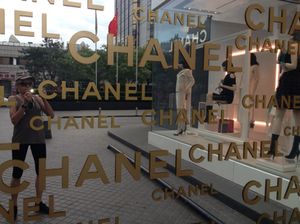 Chanel window at The Peninsula Beijing

The Battle of the Bags is taking place along Beijing’s Goldfish Lane, at The Peninsula Beijing, in full view not only of passers-by but also those inside the luxury hotel. For years, 50 of the best brands have been renting the hotel’s three floors of retail, says the gal. Then Chanel grew its scope, wanted to rent not only its prime ground floor site but the slot above it too. Chanel, owned by Alain and Gerard Wertheimer, grandsons of founder Pierre Wertheimer who helped Coco Chanel set up her company, asked Peter Marino to design the expanded store. 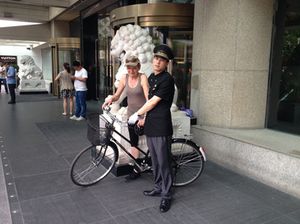 I was about to go cycling, west from the hotel to the Forbidden City. As I went out a chic young local woman, who looked about 20 (but who knows?), was waiting with six enormous black and white Chanel bags, tied with white ribbon. Is it true that as big parties are frowned on by the government, and that gift-giving is now not allowed, that hedonism is rearing its ugly head, and people are buying gifts for themselves? I put my mobile in the black and white bag that I bought, not at Chanel but at Pitlochry Theatre shop back in Scotland (£10 it cost me) and pedaled off. 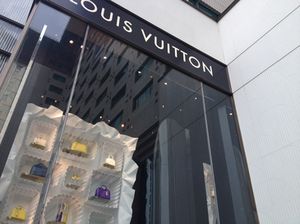 Cycling in Beijing is even more difficult than a year ago. Now no driver takes notice of traffic lights when it comes to pedestrians or cyclists. Even getting out of the hotel’s entrance was a challenge as a Lamborghini – average age of first-time purchaser, 27 – swerved right in front of me. Never daunted, on I ploughed, past the 200 side-by-side street food kiosks west of Wangfujing, to the east gate of the Forbidden City. The peripheral road is now car-less, except for golf-buggy shuttles that make the operators a mint. At the south gate of the City, the Zhongshan link down to the People’s Cultural Palace was sealed off. 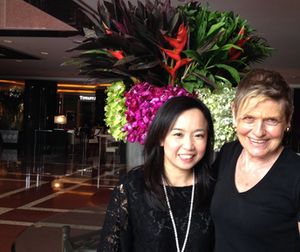 I pedaled home. Outside the hotel and looking at it, there is Chanel to your right. Well, guess what, Louis Vuitton, part of Bernard Arnault’s mighty LVMH empire, wanted to do a similar duplex store to what is now my left. And guess again, whom did M. Arnault ask to design his store but Peter Marino, so now you have Peter-left and Peter-right, and both stores try to outdo each other when it comes to dressing their windows. I am told, incidentally, that retail and customer service are not synonymous in China, which must be excruciating for Japanese, who are so perfectly mannered, when they come to shop here – but help is at hand, for Louis Vuitton, at least, because Mr Arnault now has Christophe Sadones, former GM of Park Hyatt Shanghai, heading his China empire. 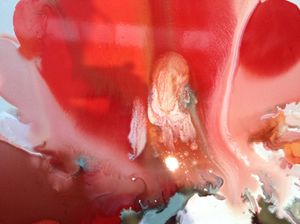 As always, the fresh flowers in the hotel are exquisite – they are done by the flower master to the Japanese court – and since I run into my good friend Cecilia here, unexpectedly, it makes sense to photograph her yet again, by flowers. There are also, until August, dozens of sensational painted flower works around. Peninsula Beijing’s creative GM Joseph Sampermans has a quarterly-changing artist in residence. Right now, Chen Yu has turned suite 460 into a studio, where she paints, and gives kids’ art lessons – as of August, in honour of the opening of The Peninsula Paris, French sculptor Aima (St-Huron) takes over, through October. 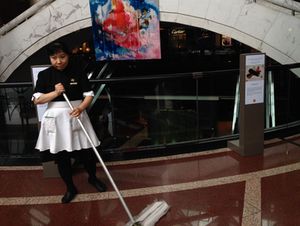 Keeping it even cleaner

Come early next year, whole armies of artists will begin to move in as, one area at a time, this luxury hotel takes its number of rooms down from 525, total, to 248. These will be super-rooms, bigger and brighter and more customer-friendly than ever. I have to leave now. On my way out I pass a maid, quite unnecessarily mopping the already-pristine floor. Years ago James Smith, GM of the much-missed Hong Kong Hilton, always had a maid cleaning the escalator of the Captain’s Grill as business tycoons were arriving for lunch. Psychologically very clever, and brought up to date by the thoughtful Joseph Sampermans.