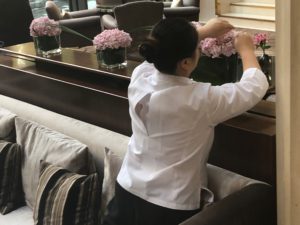 The Regent Beijing is a massive operation where things are continuously tweaked to achieve perfection – the gal was mesmerised by this woman making sure every arrangement of pink flowers was absolutely perfect, which meant taking out a petal here and there. The hotel has 500 rooms and it runs at nearly full house, with not only business but leisure guests, upmarket groups who like the proximity to the Forbidden City and other sites. In addition, the gal found this time that by turning right out of the hotel you walk very quickly past dozens of side-by-side store fronts, some not more than six feet wide but the stores going way way back, offering shoes here, with underwear upholstery in the next, and noodle soup in the next. 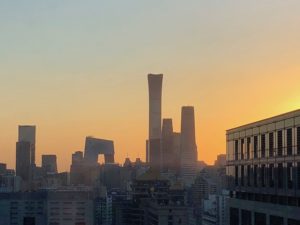 .. and another lovely day begins

Nick Emery, who is GM of this slick operation, explained over dinner how excited he is at the new-look Regent concept, which will see this 19-floor property being titivated by its passionat owners, the Fu Wah International Group, who will redecorate to conform with Regent’s new brand standards. The new look will suitably complement, say, the Aston Martin showroom that is also in this building. Fu Wah have their business interests, it seems, in many different forms of luxury. Not enough hours later, I could view the sunrise from suite 1818. I needed to get going (they even tweaked the gym’s opening hours for me, and a young man honestly did not seem to mind having come in 30 minutes early, at 5.30 a.m. 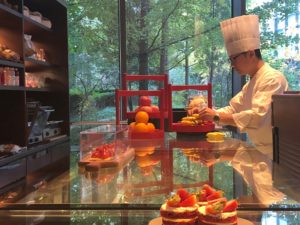 Setting up the deli

I went outside, for a couple of deep breaths of fresh air and, as I came back in, people were setting up the lobby deli that does a great job, day and evening long, selling coffees, tea and baked goods – all paid for by mobile devices, of course. I breakfasted in the calm of the 17th floor Club Lounge, already so much higher quality than I remember from previous visits (yes, tweak enough and the results show).   I had actually thought of having a ‘Beijing breakfast’ in my room.  This would have been fresh boiled chicken congee with mixed vegetables; wok-fried egg noodles, bean sprouts and yellow chives; bread dough stick with salted egg, peanuts and preserved vegetables; Chinese tea or coffee. 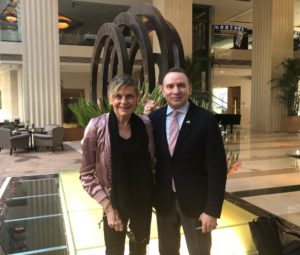 Back down in the lobby a couple of hours later, Nick Emery was sporting a pink tie, as if to match the flowers.  No, he explained, this is part of pink-tie Friday, a new initiative that he hopes to evolve into a benefit for a charity, as yet not decided.  Already all his managers wear pink ties, and it could easily spread – let us hope that one of those nearby hole-in-the-wall stores holds a person with a sewing machine and an endless roll of pale pink fabric.  I cannot wait to return, to see what has happened – but by then perhaps the new-look Regent livery will be in place and pale pink just does not go with the décor. NOW SEE SUITE 1818