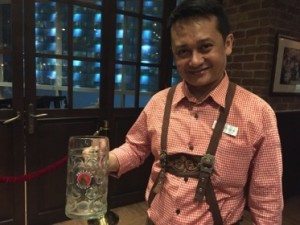 Beer is all gone, is the sign given by this cheery server at Paulaner Brauhaus at Hotel Indonesia Kempinski, Jakarta‘s signature luxury hotel completed on President Soekarno’s orders for the Asian Games in 1962. Last week, Paulaner Brauhaus hosted its annual four-night Oktoberfest, 7 p.m. through to the early hours. A million rupiah, equivalent to $75, and you got a jolly good three-course meal, live entertainment, and freeflow beer. No wonder the Brauhaus, which seats about 500, got through a total of 2,000 litres of beer during the festival. Fortunately, says the gal, the master brewer – Indonesia‘s only one, who went to Germany to study to be a doctor but realised he would be in greater demand if he switched to beer engineering – was obviously soon back at work. 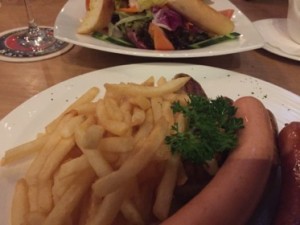 Bavarian sausages and fries, and a salad

Tonight, even on a Sunday, the place was packed. It is now up on the second floor, part of the amazing Grand Indonesia shopping mall, connected to the hotel – and anyone who knows Jakarta will quickly tell you that hotels work best if they are actually part of shopping malls (here, at the 289-room Hotel Indonesia Kempinski, average weekend occupancy is 98%, nearly all comprising Indonesians coming in from all over the country, to shop). I am surrounded by families and young couples and 50% are working their smartphones, particularly when the live band stops for a break. Menu covers are heavy wood, offering things like beer samplers, three 0.1-litre glasses offering, all unfiltered, hell golden lager, dunkel dark beer and weissbier wheat beer. I choose a Bavarian sausage platter, one each Nuremberg, Debrecener, Vienna and Thuringian sausage, with crispest fries – plus a garden salad with garlic bread. 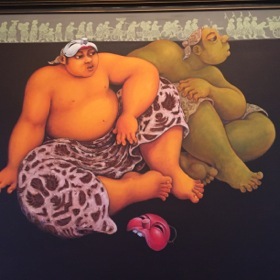 Did Budiyana’s two enjoy themselves at Paulaner Brauhaus?

Yes, there are two weddings going on back in the hotel, and, as always since it opened 53 years ago, high society sits in alcoves off the main lobby, to see and be seen. There is some interesting art, including this 2009 painting, Topeng (mask) by Budiyana. Many Indonesians, incidentally, only have one name. Apparently when checking in for flights and completing other forms that have asterisks for both first and family name, you simply put your one name in for both, but what happens when trying to fly in the USA where flight tickets must exactly replicate all official documentation? Talking of the US, it was two American architects, Abel Sorensen and his wife Wendy, who designed this hotel, declared Cultural Heritage #475 in 1993. The hotel was bought in 2004 by Budi Hartono, a septuagenarian who owns and runs the world’s third largest maker of kretek, clove cigarettes – they have 60-80% tobacco, the rest mostly ground cloves. Fortunately Budi Hartono is said to be worth $9.1 billion, some of which he has invested in putting up, next to the hotel, a tower of luxury residences, atop floors of carparking. 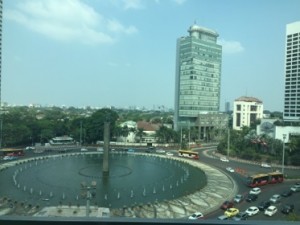 Looking down, from suite 830, at Jakarta’s Bunderan HI circle

Those lucky residents share the luxury hotel’s 17th floor rooftop pool and garden, and the gym. They can also use the spa, which offers Ramburi products, from Thailand (try Maria for a really good facial). I loved the space in suite 830, which allowed access to the seventh floor Ganesha lounge, a cool retreat from the sometimes-hectic ground floor Signatures breakfast room. I also overlooked the Bunderan HI – which stands for Hotel Indonesia – circle, a 50-foot diameter lake around a 90-foot column topped by a bouquet-bearing woman erected, like the hotel, to welcome athletes to the 1962 Asian Games. This is truly the centre of Jakarta: I look left to Grand Hyatt, and right to Mandarin Oriental. Looking down I see the traffic is fairly light at the moment. There are sensibly a lot of motorbikes around town (the hotel’s GM, Alex Pichel, is a biker) but I realise, again sensibly, I have not seen a single push-bike since I arrived in town – other, that is, than a small decorative bike of flowers, a tiny element in yet another over-the-top wedding theatre.