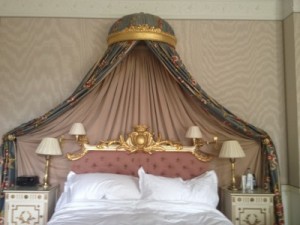 The gal at first thought this glorious picture – above – was in a church or something but in fact it is on the wall behind one of the beds in China World‘s Summit Wing, Beijing. Ah, there are scrumptious beds, too, at Cliveden, the country-house with so much character, by the Thames near Taplow in the rolling English countryside. Cliveden, run by Sue Williams, is one of England’s most memorable luxury hotels – as well as the house, dating back to 1660, there are 376 acres of grounds, including some immaculate gardens. Here is the bed from the Sutherland Suite, named for George Sutherland-Leveson-Gower, Duke of Sutherland 1786-1861. Now of course, says the gal, he did not sleep on this mattress, with these sheets, but the outline of the bedhead might have been the same. 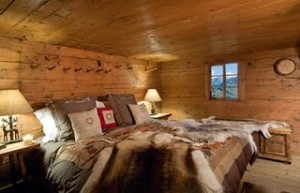 This leads to more musings on beds. Hotels have beds of all shapes and sizes – I have slept in a round bed at Burj Al Arab, I have even once, and once only, slept on a waterbed. One of the most uncomfortable beds ever was a thin mattress put in a real Wild West covered wagon in a big room with heavy wooden shutters, a themed concept at a franchised Sheraton in Beijing that fortunately no longer exists. Talking of wooden shutters, stay at Gstaad Palace, during its long summer opening, and you can have an away-night at its genuine 1786-vintage Walig Hut, high above the treeline above Gstaad. You are driven there, and a chef will produce, say, a warming Ticino red wine to go with oven-cooked loin of baby lamb. The bed fortunately has masses of fur covers as the nights can be cold. 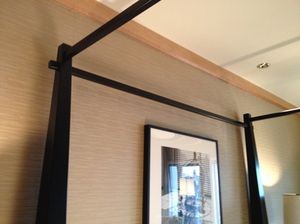 Beds come in all heights. The tallest I have come across is, floor to top of the made-up mattress, 35 inches, in Mark Brazier-Jones’ Boudoir Suite at Iniala Beach House, Phuket. The lowest are futons on the floor, which can be incredibly comfortable, as at Aman Tokyo, and in Spa Suites at Grand Hyatt Hong Kong. Then there are four-posters, some of which have far too many curtains and you do not know when they were last cleaned, plus there is no way you can see any of the lights outside your ‘prison’ so goodbye, for that night, to pre-sleep reading. Four-posters that are outline-only, as at Mandarin Oriental Boston, are, on the other hand, delightful. See a full range of four-posters in the video below. 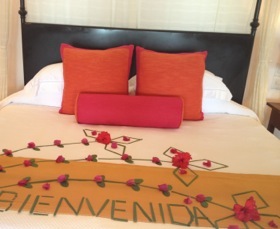 Luxury hotels by water sometimes think it is a good idea to decorate a bed, as, here on the right, at Belmond Maroma, 20 minutes’ drive north of Mayakoba. I love this luxury hotel, built in 1975 with such passion by architect Jose Luis Morena and his wife Sally Shaw, who still live onsite. Last time I stayed there, I helped dispatch baby turtles, the size of mandarin oranges, into the ocean (how many survived?). Later, I slept magnificently, and woke up, the decoration on the bed considerably disturbed, and listened to the waves, immediately outside.