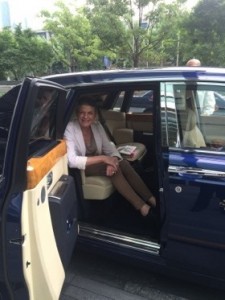 It always helps to arrive at luxury hotels in style. The gal remembers getting out of a yellow cab at Four Seasons Hotel New York clutching a contact lens in a tissue – now as we know those yellow cabs are notorious for many reasons, one of which is getting in and out. Much more enjoyable was arriving at Pudong Shangri-La East Shanghai in one of the hotel’s own little vehicles. A Rolls-Royce is always real style, and, as always, it would have been even nicer if the journey had been longer. 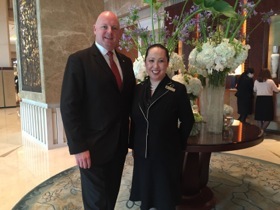 Judy Leung has been manager of  the 981-room hotel’s 29th floor Horizon Club for ten years, and she seems to know everyone. The club gets better and better. What used to be a smoking room, taking up half the entire area, is now, thankfully, smoke-free so you have a choice of city view, which is what most prefer, or river view, which of course was my choice. There are lots of choices in this hotel, partly because of its size: a lunch promotion says 300 chefs are ready, in a total of eight restaurants which, between them, have 20 ‘set lunches’. 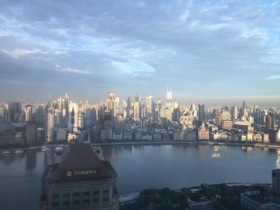 Sunrise across the river

Locals like this, pay ahead and save time. It also saves the hotel valuable commission: if diners pay ahead on Wechatpay there simply IS no commission, at the moment – it is rumoured Wechatpay will bring in a low commission (Alipay, by contrast, charges 5.5 percent. I am in one of the hotel’s end suites, a number -62, this time 3462. As the sun rises I look across the Huangpu river to the pineapple-topped Bund Centre, which houses the Westin, and the two-pronged highrise, Bai Lian Shimao International Plaza, which holds the Le Royal Méridien. 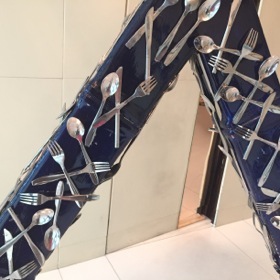 This is a very thoughtful hotel. I have a telescope on a stand, two banks of spare international sockets, a mini step machine, a full set of office equipment and marvellous Jasmine tea flowers (brew until the flower opens, and the resulting drink reduces high blood pressure and arthritis). I also have a four-foot high red English postbox, with my name on a letter sticking out, and a same-size telephone box. I head up to Jade on 36 restaurant, to find Adam Tihany‘s unique open ricebowl entrance sculpture has now been decorated with real cutlery. 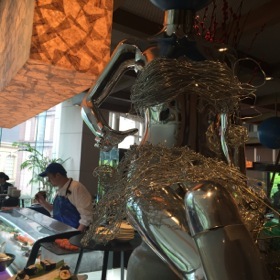 Yes, this is also a luxury hotel with a great sense of humour. Jade on 36 has been simplified, with linen cloths removed and carpeting replaced by wood flooring – and haute cuisine is now French brasserie, to great success. So, down on the upper first floor, Yi all-day restaurant, which has no fewer than 12 serving areas with appropriate Indian, Japanese or Malay chefs, or whatever, also has some hilarious sculptures dotted around on buffet areas. For those who want to eat in their bedrooms, room service offers a 15-minute menu, including scrambled egg and bacon croissant, or a double beef and cheese burger, wrapped to go. This menu was launched by 350 locals, 300 of whom were cancer survivors, eating breakfast in beds set up in the hotel’s ballroom: the hotel got publicity, a cancer charity made lots of money, and the event made it to the Guinness Book of World Records.