Keep your eyes open, meet new people and your life benefits, says the gal.  In Osaka she met the hilarious Tetsuya Ishihara, a long-time Starwood loyalist who is the opening GM of the stunning St Regis, that brand’s entry into Japan.

He, Ishihara-san learned his English when staying in the USA, but he must have been born with his sense of humour.  He claims to have put on over ten kilos since the hotel’s opening late 2010, so now he only has a black cocotte of steamed vegetables for lunch.

We are in the hotel’s bistro – unlike every other luxury hotel in town, the St Regis does not have Chinese or Japanese cuisine, only French with a chef from Bordeaux, or Italian as translated by a talented Japanese. 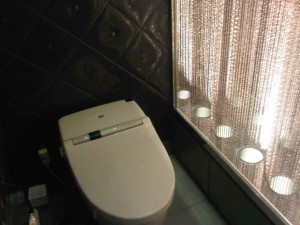 Afterwards, he insists on a walk, up 33 wood stairs to the upper floor of the bistro, Rue D’Or.  Up there is an inner sanctuary, a haven of burgundy fabric and precious bottles.

There is 15million yen-worth of wine in the adjacent wine cellar, but there is another treasure. The ladies’ washroom has the statutory heated-seat commode (let’s be polite) but one wall is a curtain of gold beads, sandwiched between glass.

Talking of those heated-necessities, one of my new Japanese friends was horror-struck when asked if they turned the seat heat off to conserve energy after the March 2011 earthquake disaster.  Oh NO, she said, we needed to keep warm.

Images form of salarymen in freezing offices sitting on the heated-necessities while working on the accounts of, say, Olympus, or DOCOMO, the dreadful Japanese telecoms company that, apparently, actually has exclusivity to sell BlackBerrys in Japan and THAT is why no foreign BlackBerrys work here…

The restaurant is on a ground-floor strategic corner of the 27-floor Hommachi Garden City building. This also houses the 140-room hotel, from the 12th floor up.  We go through to the hotel’s ground floor arrivals area to see a stunning silver sculpture, a plum tree at night. It is against a dark wall, to increase the illusion.

This place is all designed by GA International, who also did the oh-so-Japanese Conrad Tokyo, with exaggeratedly-high ceilings and lots of arches and a presidential suite that is a stunning palette of softest purples.

Sparkling tree, on the 12th (main) floor outside terrace, daytime in the rain

Here, at St Regis Osaka, you are also similarly aware of Japan-ness.  Rise up to the 12th floor lobby and you can look out at real trees, dripping with jewels that are actually raindrops, today.

Rise up again from the lobby to your bedroom floor and you think the elevator buttons are jewels, big yellow diamante shapes that protrude like buttons on your grandmother’s mobile phone. But Help The Aged becomes beautiful. Why has no-one thought, before, of making them a feature?  Apparently even someone big from LVMH – could  even have been that eye-for-art Chairman, Bernard Arnault – raved about them.

Like all St Regis hotels, beauty is a name-of-the-game.  Here GA International have made the elevator cabins into tall sculptures of two colours of burnished steel. They have turned ‘refreshment centres’ in desirable must-haves that many want to buy. Think of a double-sized coffin, standing on four black legs, with two front doors of lacquered gold leaf.

Open the doors to find a glass-fronted minibar surrounded by matt-black drawers, for glasses and so on, and shelves, for the espresso coffee maker, a kettle, and Japanese and western tea-sets.  It is all so beautiful – but this is Japan.

Two simple citrus fruits sit on a plate, with a card: the yellow fruit is Hyuganatsu, from Miyazaki Prefecture (it has a sweet skin – eat it), the orange is Kanpei, a type of Japanese mandarin.

Kikyo was a 15th century priestess

Some suites are named.  2117, for instance, is called Kikyo, which means undying love.  Kikyo is generally shown as a 15th century version of today’s Miss Kitty, always-be-young, girls.

Orphaned when she was young, she went to a school for miko priests (no luxury hotel for that young lady) and became known for great spiritual power and purity.  She was entrusted with guarding the Jewel of Four Souls, which meant she could never show any signs of weakness in case demons or evil men took advantage of her.