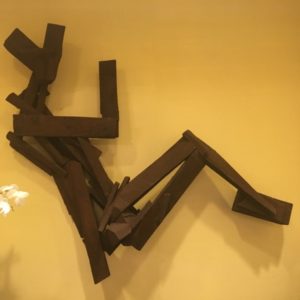 What a lovely welcome to Prague (see above), a curate stand holding a Czech afternoon tea, with the so-typical open sandwiches on the lowest level. The china, by the way, is Zwiebelmuster porcelain, from the Czech company Dubi, which started making it in 1885 – somehow what began as a pomegranate-themed design is now actually onions, plus bamboo for consistency, and peonies for wealth and nobility. The gal learns so much at the gorgeous Four Seasons Prague luxury hotel: the brand-new spa, opened this August, has a wall sculpture fashioned from wood saved from the city’s devastating 2003 flood, when the hotel was only two years old. 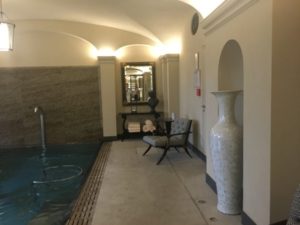 The vitality pool is highly popular

The hotel is once again led by its highly creative GM, René Beauchamp, a former chef who still has a collection of over 600 cookbooks and who apparently bakes bread on his day off. He certainly never stops innovating. Ava spa, designed like most of the rest of the 157-room hotel by Pierre-Yves Rochon, has been fashioned out of four former bedrooms and the HR office, and it is gorgeous. All four treatment rooms, including one for a couple that has a bathtub offering three different healing waters from renowned Czech spa areas, look across the Vltava river to Prague Castle, though of course blinds are put down. The 32-degree vitality pool is justly popular from the moment it opens at eight a.m. – fortunately for me, the Technogym is open 24/7. And of course there are saunas and steam in both changing rooms. 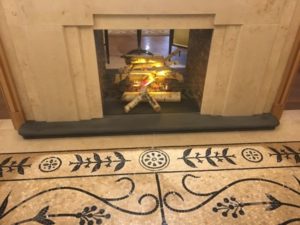 The spa has a two-way fire

Arrive at the spa and you see an artistic-looking fire, reflecting both to reception and to the waiting room beyond. Look at the floor, showing Bohemian and Czech patterns (actually floors are a vital part of the whole part of the hotel’s interiors: the carpet in lovely suite 501, with open-slightly windows looking out to the river – see the video, below – has a ripple feel indicative of the water outside, lovely on the bare feet). Yes, you know you are here in Prague, even though the therapist who gave me a brilliant Bohemian massage, with sleep- and breath-aiding linden, from the Republic’s national flower, is from Portugal. Talking later to one of the hotel’s Czech team members, who also works in the spa, she told me she had been sommelier here but after her three-year (legal) maternity leave, she wanted a change of role. 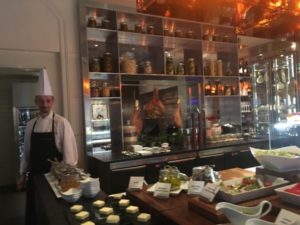 There is so much reason to head for Prague. This luxury hotel now has its own boat, which you can rent for up to ten people. After cruising on a bigger boat, on the Danube, come here, albeit three hours’ drive away, to enjoy Prague’s historic sites, miraculously unscathed during WWII. In December, the Christmas market is one of Europe’s best. At all times you will love, as I do, the hotel’s CottoCrudo (raw and cooked) Italian-with-a-twist restaurant, led by Puglia chef Leonardo di Clemente. At dinner, with my friends Stéphane Gras and Andreas Shuster from the hotel, we had the Mozzabar, a tasting of Mozzarella di Bufala Campania, Mozzarella Nodini from Puglia, and Burrata from Puglia – I then went on to salmon with miso vinaigrette, frisee salad, sesame seeds, followed by veal cheek with glazed vegetables and black truffles, all of which went magnificently with a fine Czech Pinot Noir, Gala Bavory 2014 Bavory. At breakfast, I ooh-ed and aah-ed at the superb buffet, which included local berries and such Czech breads as quark raisin strudel. This is a truly memorable hotel (and I have not even mentioned the flowers!). NOW TOUR SUITE 501